Review of "Touched by God"

For my last review of 2018, I decided to pick a book written by a very controversial figure in soccer who scored one of the most controversial goals in World Cup history.  It was a very entertaining book and it is one to pick up if you remember this tourney.  Here is my review of "Touched by God" 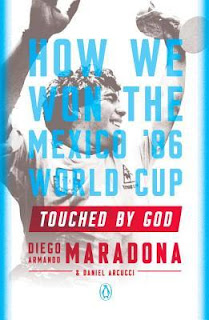 Title/Author:
“Touched by God: How We Won the Mexico ’86 World Cup” by Diego Armando Maradona
Tags:
Soccer, Football (European), Argentina, history, championship
Publish date:
May 30, 2017
Length:
256 pages
Rating:
4 of 5 stars (very good)
Review:
In a World Cup tournament that was both thrilling and controversial, Argentina won its second World Cup in 1986 behind the play of Diego Maradona. His memories of that tourney, as well as his thoughts on other players, coaches and the state of soccer in general are captured in this memoir.
There isn’t a topic about that tournament in Mexico that Maradona doesn’t mention as long as it involves Argentina’s national team. He talks about the training, the early travels to Mexico so that the team will be ready for the higher altitude. While he gives this action much credit for the success of Argentina in the World Cup, he was also highly critical of the team’s coach for his strategy and use of available players.
This last point is also worth noting because whether Maradona talks about that team, future Argentinian teams that fell short of the championship, European players with whom he shared the pitch in Naples, FIFA management and its current scandals, or even the media, it is clear that he still has some anger toward all of them, and more.  Some even believe his ego is far too big and that is the reason for this anger. While it is difficult to prove this, throughout the book he does explain why he believes what he believes and doesn’t really seem to care what others will say.
Which brings us to the main reason this book was one that I wanted to read – the controversial “Hand of God” goal in the quarterfinal match against England in that 1986 tourney.  Maradona doesn’t mince words – he states that he hit the ball into the goal with his fist, but since the referee did not call a violation and the linesmen did not challenge the call or state that they saw a violation, it is a goal.  It is the second goal he scored in that game, however, in which he has more fond memories and one that cemented his place as one of the best players in the world at that time.  That particular match also was played with the memories of the Falkland Islands war between England and Argentina still fresh in the minds of many.  Maradona tried to play down the memories of the war to use as motivation to win that match, but he repeatedly mentions that he was thinking about the young Argentinian men killed in the war.  So, it is safe to say that he and his teammates did use the war as a motivational tool.
Maradona also talks about his family, his childhood, his drug use (albeit very briefly) and today’s game. What I felt was noteworthy about that latter topic is his praise for Lionel Messi, one of the best players in the world today.  He bristles at comparisons between himself and Messi, stating that neither should be considered “better” than the other but just that they are two great players in their time.
The book does have many references by Maradona to watch a particular highlight instead of a description. Also, he refers to many people by last name only so readers who are not familiar with that team will not know who he is mentioning.  Nonetheless, this was an enjoyable read and one that is recommended for anyone interested in Maradona, that Argentina team or World Cup history.
Book Format Read:
E-book (Nook)
Buying Links:
https://www.amazon.com/Touched-God-How-Mexico-World/dp/0143129767/ref=tmm_pap_swatch_0?_encoding=UTF8&qid=&sr=
https://www.barnesandnoble.com/w/touched-by-god-diego-armando-maradona/1125581232?ean=9781101993408