Review of "Swerve or Die"

Having followed NASCAR for the better part of 30 years and having become even more interested the last few, I was very excited to learn that Kyle Petty was publishing a book.  To read about the sport from one of the most successful racing families was something to look forward to, and the book did not disappoint.  Here is my review of "Swerve or Die" 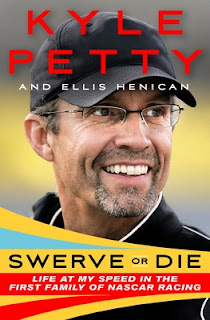 Title/Author: “Swerve or Die: Life at My Speed in the First Family of NASCAR Racing” by Kyle Petty and Ellis Henican

Review: The family of Petty is one of the most famous families in auto racing.  Lee Petty won the first sanctioned NASCAR race and his son Richard has the most wins at the highest level of NASCAR competition (Cup races) at 200.  Richard’s son Kyle won Cup races as well, and grandson Adam, who won his first ARCA race, was destined for success as well.  The stories of this legendary race family – the good, the bad, the funny and the tragic – are told in this excellent memoir by Kyle Petty, written with Ellis Henican.

It’s hard to unpack where to begin when describing this book because while it follows the family story from Kyle’s viewpoint in chronological order, it doesn’t really fit into one nice flow as Kyle goes from topic to topic – from family life to driving on the famous Daytona track as a teenager to passing down the love of racing to his sons.  Changing the focus of a particular passage fits the personality of Kyle because while he was born into a racing family, he had many other interests and talents that he has used to his benefit for his life outside racing.

Kyle talks about his musical talents that has had him performing on stage as an opening act for some of the biggest names in country music.  He mentions that even though he was disappointed that his driving career ended because the team (not Petty Enterprises, the team that both he and his father not only drove for, but also ran as the CEO – and both eventually stepped down from that spot) determined that he would not drive any longer, not his decision.  He credits his interest in music and television broadcasting as his way of staying connected with the sport.  Currently, he is an analyst for NBC’s coverage of NASCAR and hosts other talk shows and podcasts on racing.

As one might expect, he expressed his grief over the lost of his son when Adam Petty was killed in a practice run at New Hampshire Speedway in 2000.  Adam was only 19, but not only was he focused on his driving career, he wanted to help others. It led to another project that kept Kyle from becoming another athlete who wonders what to do when they no longer are competing.  A camp for children with severe medical conditions, Victory Junction, was started in Adam’s memory and is still a very popular camp where these children can just have fun for a week.

Kyle writes from a knowledgeable viewpoint, no matter what the racing topic would be.  He worked on cars – he wrote about the detail his father taught him while doing that.  He drove in races – he writes about his struggles behind the wheel as well as his victories.  He ran a racing organization, as mentioned above.  He is a successful broadcaster – he writes about the issues he sees and the people he talks to every week. He also writes about family – from his parents and grandparents to his children and his spouses (been married twice).  Just about anything one would want to know about NASCAR and Kyle Petty will be found here.  It is a great read for race fans and fans of the Petty family.

I wish to thank St. Martin’s Press for providing a copy of the book via NetGalley in exchange for an honest review.

Posted by Lance Smith at 2:00 PM No comments:

Review of "Own the Arena"

Admittedly, I had never heard of Katrina Adams when I saw this book offered on NetGalley and then I kept it buried in my TBR pile (unintentionally, of course).  Glad I finally pulled it out and read it, thanks to a couple of Goodreads challenges.  Here is my review of "Own the Arena." 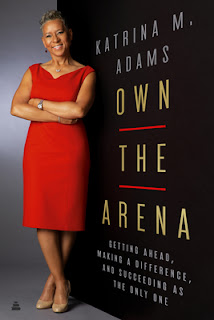 Title/Author: “Own the Arena: Match Points for Winning, From the Blacktop to the Boardroom” by Katrina M. Adams

Review: In tennis, the U.S. Open is not only one of the four Grand Slam events, but it has also been compared to the Super Bowl in terms of its power to attract fans, celebrities, top players and generate money.  Katrina Adams provides readers of this book a first-hand look at not only the action on the court, but an inside look at what goes into putting on an event like the U.S. Open, well beyond the two weeks of tennis.

Adams draws on her experience as a college and professional player and later her term as President of the United States Tennis Association (USTA) to not only showcase the U.S. Open but also provide readers with glimpses into her life, both personally and professionally.  Her success in both areas was due to many factors and some of those she shares with readers in such a way that no matter one’s profession and athletic interests, if any, they can be used to achieve one’s goals.

Being the first Black woman to hold the position, Adams faced many challenges as one might expect.  She speaks eloquently and passionately about overcoming racism and sexism in the sport and does so without bitterness.  Indeed, she talks glowingly about those who helped her along the way and shared the same passion.  One excellent example is Billie Jean King, who she credits as being a pioneer in brining many issues to the forefront for women’s tennis such as equal pay and facilities.  Her dialogue on these social issues is never condemning – she does include white men when she talks about diversity and welcoming all views – and a reader will come away with a new sense of awareness for these matters.

As for the tennis, her career as a player is covered adequately, but her career in the management of the USTA is much better.  It may be due to recency, or maybe the accomplishments, but for both topics, a reader will learn much about Adams and her work at the USTA and U.S. Open.  An excellent story, for just one of many examples, is how her culinary team makes sure that there is appropriate food for all tastes and cultures of VIPs who visit those suites during the tourney.  One particular guest whose taste for Southern food resulted in collard greens and fried chicken made for a very touching story.

Accounts like this are what make this book an enjoyable read for any tennis fan, whether or not they are familiar with Adams’ career either as a player or as an executive. The tips are all applicable to her work in both areas and will be for a reader as well.

I wish to thank Amistad for providing a copy of the book via NetGalley in exchange for an honest review.

Review of "My Greatest Save"

While most will associate the 1999 Women's World Cup with the famous picture of Brandi Chastain, when I saw this book was offered for review, I picked it up right away as I remembered that Briana Scurry played just as big a role in that historic victory over China as Chastain did.  This is a very good sports memoir that many would enjoy reading.  Here is my review of "My Greatest Save." 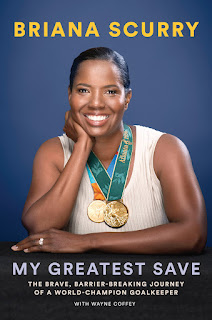 Title/Author: “My Greatest Save: The Brave, Barrier-Breaking Journey of a World Champion Goaltender” by Briana Scurry with Wayne Coffey

Review: When the United States National Women’s Soccer Team (USNWST) won the 1999 World Cup, most remember the famous reaction by Brandi Chastain who, after she scored the winning goal in a penalty kick shootout, she ripped off her jersey in the celebration.  What is not remembered as much is how the goalkeeper for the team, Briana Scurry, made an incredible save on one of the kicks from China that made Chastain’s winning moment possible.  Scurry’s career was very successful, and she discusses that along with her personal life in this easy-to-read memoir written with Wayne Coffey.

I use the term “easy-to-read” because aside from possibly a few soccer terms, this is written in simple, conversational language. There is plenty of humor in snippets that may sound like “dad jokes.” No matter the topic, even during her darkest time when she had thoughts of suicide, Scurry writes with a relaxed and mostly even keeled mindset.  It seemed amazing that she could discuss thoughts about jumping off a bridge into rushing water with the same process as she did about saves made during crucial international matches.

She also writes about social issues that one might expect, given that she is a high-profile Black lesbian athlete, but she does not step into any activism or strongly worded statements.  If she has very strong beliefs, they were not present in the book.  The best example is when she realized that she was gay with this statement: “…I was awakening to the reality that I was a lesbian and was totally at peace with it.  There was no reason for me to issue some sort of declaration and have it notarized and counter signed.”  She also has similar thoughts on racism as being Black, she experienced it and expressed her displeasure but stopped short of calling for strong measures.

The best parts of the book, as one might expect, is her memories of some of the better moments of her soccer career, such as the aforementioned 1999 World Cup along with two gold medals in the 1996 and 2004 Olympics.  Goalkeepers have their own sets of training, conditioning, drills and camaraderie – and Scurry brings all of those to the reader with great recollections of game action, of interactions with teammates and opponents and the joys and sorrows of important wins and losses.

While the title might make a reader expect a book with very dramatic passages, this book really doesn’t have those – instead, a reader will go on a journey into the world of a goalkeeper who left her mark in international and American soccer and wants to share it all with the readers.