Review of "The Year of the Rocket"

I always like to find books about the Canadian Football League as while the sport is close to that in the United States and the NFL, there's just something about the CFL that attracts me to not only watch some games and the Grey Cup, but also to read anything I can find on it.  This book is a reason that I do so, as I enjoyed this book on the 1991 Toronto Argonauts. 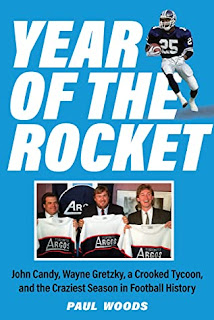 Title/Author: “Year of the Rocket: When John Candy, Wayne Gretzky, and a Crooked Tycoon Pulled Off the Craziest Season in Football History” by Paul Woods

Review: When a college football star signs with another professional league that is not the NFL, it usually makes big news.  This was the case in 1991 when Notre Dame star Raghib "Rocket" Ismail signed with the Toronto Argonauts of the Canadian Football League (CFL).  This book by Paul Woods is a very good account of that 1991 season for the Argonauts, which would not have happened without two other famous celebrities with ties to the team.

Those celebrities were Wayne Gretzky and John Candy, who along with Los Angeles Kings owner Bruce McNall (who was Gretzky's owner at the time as he was a player on the Kings) purchased the floundering CFL and promised to make the team better.  Their first step was to sign Ismail.  This was done not only to make the Argonauts better but also to bring much more exposure to the league and eventually expand it to the United States.

Some of those goals were accomplished, thanks to the generous cash flow of McNall.  Not only was Ismail's contract much higher than the limit on salaries placed on CFL TEAMS, but there were also other incentives such as $100 bonuses paid to Argonaut players.  That season, thanks to not only Ismail, whose main contributions were exciting kick returns (the description of his return touchdown in the 1991 Grey Cup championship game is my favorite writing in the book about action on the field) but also a dominant offense led Toronto to the championship.

What also makes this book quite good is that Woods did NOT limit the book to being about the Rocket, McNall, Gretzky and Candy.  Many players and coaches on that Argonauts team have nice write-ups and for those who want to get a good picture of what the state of the CFL was at that time, this book does that as well.  American readers may not be familiar with all the names, but will still enjoy this book about a championship team that took an entire nation by storm.

I wish to thank Sutherland House for providing a copy of the book via NetGalley in exchange for an honest review.

Links: Year of the Rocket: When John Candy, Wayne Gretzky, and a Crooked Tycoon Pulled Off the Craziest Season in Football History: Woods, Paul: 9781989555446: Amazon.com: Books

Posted by Lance Smith at 1:06 PM No comments:

Review of "The Case for Barry Bonds"

Realizing that just the title may evoke strong reactions for this review, I will start with this disclaimer: I am in the camp that believes Barry Bonds should be in the Baseball Hall of Fame and like the book and this review states, the book did not change my mind nor is that an objective of the book.  I do believe this is worth reading whether or not one agrees with this author.  Here is my review of "The Case for Barry Bonds." 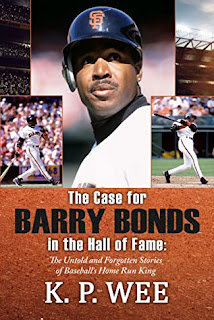 Title/Author: "The Case for Barry Bonds in the Hall of Fame: The Untold and Forgotten Stories of Baseball's Home Run King" by K. P. Wee

Review: Barry Bonds is one of the most polarizing figures in the history of Major League Baseball for many reasons.  Of course, the main reason is the allegations of his use of performance enhancing drugs while setting the all time record for home runs – one of the most hallowed records in all of sports.  Add in his personality and his frequent disdain of the press and you have a few of the main reasons given why as of this review, he has yet to be elected by baseball writers to the Hall of Fame. This book by K. P. Wee tells many reasons why he should be enshrined.

To Wee's credit, he realizes that many people are already set in their minds about Bonds and his worthiness to be enshrined or to hold the records that he does. He also acknowledges at the beginning of the book that he very likely will not change the minds of those who have such strong beliefs about Bonds, either way.  Instead, he states that the book is written to tell about relationships with former teammates, stories and statistics that have not been widely reported.

To that extent, the book does do what it sets out to do, although there are several stories that are repeated many times during the book.  One example of this is that despite the coverage of the argument between Bonds and his manager with the Pittsburgh Pirates at the time (1991), Jim Leyland, the two men have a strong friendship that endures to this day and the argument was something that was blown out of proportion.  This is one of many repetitive points, some of which come about because some of the players interviewed are quoted multiple times in different chapters.

Speaking of the chapters, each one is about either a reason that voters may cite in order to not vote for Bonds or reasons that the author believes are used in order to withhold a vote for Bonds.  Wee will either point to double standards with these reasons (why is so-and-so given a pass while Bonds is criticized for it?) or will provide evidence that disputes the claim.  This makes up the bulk of the book and even though Wee may have stated that he was simply trying to set the record straight, it comes across as either excuses to those against Bonds being inducted or items that Bonds supporters will gleefully use without careful thought.

In the end, it was a book that I thought tried to carry out its mission and was substantial but missed its mark on trying to be objective.  Not that there is anything wrong with that and even if more people disagree with Wee than agree, he at least accomplishes one goal of presenting a case for Bonds to be included in the Hall of Fame.

I wish to thank Riverdale Avenue Books for providing a copy of the book via NetGalley in exchange for an honest review.

With apologies for the long period of no reviews, I am back to reviewing after getting my personal schedule settled.  This book is one that those who are not familiar with Tony Lazzeri and what he meant to the Italian-American population in the 1920's and 1930's should read.  Like me, readers will learn a lot about not only the man, but also about the social inequities that this population was facing. 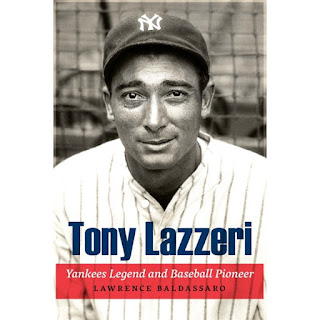 Review: When one thinks of the 1927 New York Yankees, the first names that come to mind are Babe Ruth and Lou Gehrig.  However, they were far from the only two fine baseball players on that historic team.  One was Tony Lazzeri, whose main claim to fame prior to 1927 came the previous October when he struck out in the World Series against Grover Cleveland Alexander with the bases loaded.  Unfortunately, history was not kind to Lazzeri for many years afterward because of that one strikeout but that was eventually corrected and Lazzeri became a member of the baseball Hall of Fame in 1991, 45 years after his untimely death at age 42.  Lazzeri's life and career is captured in this book by Lawrence Baldassaro.

The structure is the same basic format as most sports biographies – accounts of Lazzeri's family and his childhood in the hometown.  In his case, that is San Francisco.  Then it covers his career and important personal events, a detailed account of not only the baseball on the field but also important events and implications off the field and finally his life after baseball.  Some parts of this are short, such as the latter because he died soon after his baseball career was over but overall the book is well organized and reads well.

There are two big takeaways from reading this book, especially if the reader knows little about Lazzeri.  One is that no matter how good his statistics were (and they were VERY good for an extended period in the 1920's and 1930's) there was always something to overshadow them.  If not the strikeout in 1926 mentioned earlier, it would be the success of his teammates like Babe Ruth and Lou Gehrig, or it would be the press coverage that would make slurs of his Italian heritage.  At the time, as Baldassaro reminds the reader, slurs like "dago" and "wop" were common in putting down Italians.

However, the second big takeaway from the book is that despite this negative press, Lazzeri's success was an inspiration to Italian-Americans and gave them a baseball hero they could look up to, follow in the newspaper or in the stands and point out with pride that he was one of theirs.  Lazzeri never shied away from this, despite being mostly private. While he was considered an excellent teammate by those he played with, he always preferred to keep his personal life private, something that wasn't always successful.

Despite all of this, many do agree, then and now, that Lazzeri deserves his place in baseball history both for his representation of his ethnicity and his performance on the field.  Even though he did not complete his career as a Yankee, playing briefly for the Cubs, Giants and the minor league Toronto Maple Leafs before ending his playing days, he is considered to be one of the all time Yankee greats.  After reading this book, the reader will understand why that is the case.

Posted by Lance Smith at 1:10 PM No comments: