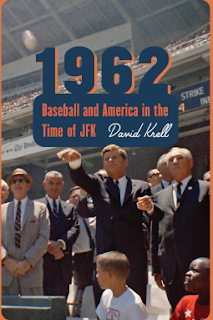 "1962: Baseball and America in the Time of JFK" by David Krell

For both baseball and America, 1962 was an exciting year.  In baseball, the National League pennant came down to a best of three playoff between the Los Angeles Dodgers and San Francisco Giants. The league expanded to 10 teams, adding the Houston Colt .45s and the New York Mets.  While the New York Yankees won in the American League yet again, two surprising teams there included the Minnesota Twins and California Angels.  Both of those teams not only surpassed expectations but also had a pitcher throw a no hitter.

As for America, between the changes in entertainment such as television shows and movies, the excitement generated by the young and attractive President and First Lady and the pride the entire country had with the space program, that was producing an optimistic feeling around the nation.  Both of these subjects are blended together in this book by David Krell.

The book would be described better by switching around the words "baseball" and "America" in the title as there is much more information on American events in television, movies, politics, society and space than there is about baseball.  In the introduction, Krell states that he will only write about five teams – the two new National League franchises plus the Dodgers, Giants and Yankees.  The other two mentioned in this review, the Angels and Twins, only had brief mentions because of the no hitters and also because Angels pitcher Bo Belinsky made more headlines on the society pages than on the sports pages because of his marriage to Mamie Van Doren.

Then, when one reads about those five teams, this is mostly a short description of the teams on the field.  Instead, the dialogue is most short biographies about the more important players on those teams. These are all brief, whether the player was a star at the time or a bench jockey – if there was something interesting to share, Krell did so.  A reader looking for writing about the actual play on the field will find the most about that in the chapter on the World Series, and even then there are some games that are covered thoroughly and some get just scant text.

However, if the reader is looking for material on the other topics, then this book is a treasure trove of information.  I found the most interesting parts on these topics were anything on the space program and the writing on the Belinsky-Van Doren marriage. These and other topics, especially those about President Kennedy or the First Lady Jacqueline Kennedy and her televised "tour" of the White House were the better parts of the book.  Because these were very good, I did decide to finish the book even though I was hoping to read more about baseball.  With a two star rating for the baseball writing and the four star rating for the writing on other topics, I give this one an overall rating of three stars and while I would not recommend it for baseball readers, I do believe that readers interested in other topics that were newsworthy in 1962 would find this book enjoyable.

It will be hard to find any sports book that captures the atmosphere of sport and the nation during the coronavirus pandemic than this book about the bubble where the 2020 NBA season was completed.  Here is my review of "Bubbleball." 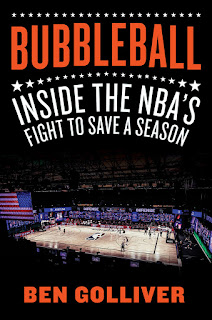 "Bubbleball: Inside the NBA's Fight to Save a Season" by Ben Golliver

When the NBA shut down operations on March 11, 2020 after Rudy Goebert of the Utah Jazz tested positive for the coronavirus, the entire sports world, as well as the league, was thrown into disarray.  Amid all the uncertainty, the NBA was working on a plan to try to salvage the season and crown a legitimate champion.  How the league did this is captured in this excellent book by Washington Post NBA writer Ben Golliver.

Usually when an author who is not an athlete or part of the subject inserts themself into a book, I believe that it distracts from the actual topic.  That was not the case for this book, as Golliver's experiences in the "bubble" where all personnel associated with the league's restart – players, coaches, officials, media and others – were housed and worked, was not only enlightening but absolutely necessary to illustrate what everyone was going through at the Disney sports complex.

Another excellent aspect of the book was how the players responded to the shooting of George Floyd, Breonna Taylor and Jacob Blake – the most prominent cases of police shootings of Black people.  The social justice messages that were on display on the court, player jerseys and stated by players and coaches were just as much a part of the bubble experience as basketball and virus testing.  The section on the atmosphere and discussion in the Milwaukee Bucks dressing room when they learned about the Blake shooting was especially profound. Because the locker rooms were much smaller than those of NBA arenas and the soundproofing was not as effective, Golliver was privy to information that he normally wouldn't be and as a result, it was a moving section about the Bucks' decision to not play the Orlando Magic that night.

Of course, the basketball writing was very good as well.  He covered all rounds of the playoffs and the completion of the regular season with just the right amount of detail.  He didn't get too bogged down with play-by-play descriptions, but these were more than just brief overviews as well. As well as the prose was written, however, when the Los Angeles Lakers were crowned as the 2020 champions after the Miami Heat surprisingly gave them six tough games in the Finals, much like the players, readers will find themselves glad that the odyssey was coming to end.  Basketball aficionados will love this book for the inside look of life in the bubble while more casual fans will appreciate this look at the strange but completed 2019-20 NBA season.

As typically happens every April, I lag somewhat on my reading when baseball season starts as I watch many of the early games before settling into a routine.  So, when I did find time to read, it was only appropriate to make it a baseball book - the new memoir by Dave Parker.  Here is my review of "Cobra" 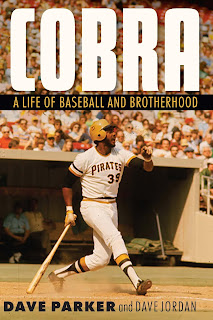 "Cobra: A Life of Baseball and Brotherhood" by Dave Parker with Dave Jordan

Dave Parker was a hitter many pitchers feared in the 1970s when he was a member of the Pittsburgh Pirates.  He and his teammates, most notably Willie Stargell, became known as the "We Are Family" team in 1979 when the Sister Sledge song would be playing while the Pirates were on their way to a World Series title. He has now written a memoir sharing his memories of that team and his baseball career with David Jordan.

Baseball wasn't the only sport Parker excelled in.  A Cincinnati native, he had dreams of attending Ohio State University on a football scholarship and he may have done so had he not suffered a knee injury in high school.  While that limited his effectiveness on the gridiron, he still excelled on the diamond and as a result, signed with the Pirates as a teenager.

His climb through the minor leagues, his eventual call-up to the Pirates and later his performance with Pittsburgh is filled with entertaining stories.  The reader will have a challenge on their hands keeping up with all the nicknames that Parker had for all his teammates – I often had to look back to see who was named what name.  The book does touch on racial issues, but not overtly so.  The most that he mentions this is when he was receiving death threats before the 1979 All-Star game – the game in which he produced what is most likely the moment every fan who saw it remembers.  It did not come at the plate, but in right field when he threw out Brian Downing at home plate, keeping the game tied at that time and giving his National League teammates a chance to win the game, which they did.

There are also sections about his cocaine use – subtle at first during the peak of his playing career.  He talks about that, the later trial of a Pittsburgh cocaine dealer that rocked the baseball world and also some of his time with other teams, most notably his hometown Cincinnati Reds, where he was still productive, even leading the league in runs batted in during the 1985 season.  However, just sections on his time with the Pirates is what makes the book a very good read and those who are Pirates fans or remember Parker from that era of baseball will want to pick this book up.

Posted by Lance Smith at 1:29 PM No comments: