Wishing to find some more sports fiction to add to my reading list as well as the non-fiction books I am either provided or will find, I saw this one about a hockey player in northern Ontario and was intrigued.  It was so much better than I expected.  This book is also currently a movie on Netflix so that will be the next item on my to-watch list there, although I can't imagine the movie can be better than this book.  Here is my review of "Indian Horse" 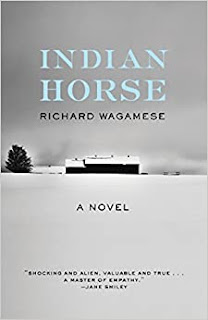 It isn't often that one can read a story that combines indigenous culture with ice hockey, but this tale of a northern Ontario indigenous boy who was taken from his family, sent to a Catholic "school" in which the children were more indentured servants than student and fell in love with hockey is one that should be read by everyone who enjoys the sport – if nothing else to illustrate struggles that indigenous people encounter.

Author Richard Wagamese penned a wonderful tale about Saul, aka "Indian Horse" and his evolution from a scared boy who was violently snatched from his grandmother to his development as a hockey player thanks to one priest who allowed him to start off working at the makeshift rink on the school ground.  From there, Saul, through hard work and determination on his own, develops into a fine hockey player.  He becomes far more skilled at the game than his classmates and a visitor to the school invites him to live with another family on the nearby reservation and play on their team that plays other teams of indigenous players.  Throughout this time, Saul keeps not only getting better at hockey, but is also burdened by his loss of family and grateful to the priest that introduced him to hockey.  He gets so good that he attracts the attention of a Toronto Maple Leafs scout, who signs him to a contract to play for their Junior team as Saul is still not an adult.

The story from here will take a different turn than one may expect and while this review will not reveal any more of the story, it is one that will bring out many emotions in the reader.  The writing about hockey, especially Saul's description of his play on the ice, is wonderful and any hockey reader will enjoy these passages.  Saul's description of what his family and his people are enduring is something everyone should read and understand.  If only for these two reasons, that is enough to recommend this book for many readers.

Review of "Wish It Lasted Forever"

While I have always been a Minnesota Timberwolves fan since they entered the NBA in 1989, before that time I was a Boston Celtics fan.  This book about the Celtics of the first few years of the Larry Bird era took me back to that time that I loved the game the most.  I agree with the title of the book in my latest review - "Wish It Lasted Forever." 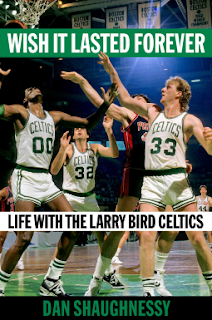 Review: Professional basketball in the early and mid-1980’s were defined by two teams and two players.  One of them was the Los Angeles Lakers, led by Magic Johnson.  The other one was the Boston Celtics and their superstar, Larry Bird.  The latter were the subject of this terrific book by the reporter who was a beat writer for the Boston Globe during that time, Dan Shaughnessy.  He covered the team between 1981 and 1986, leaving the team’s beat midway through that season, which was the third one for the Celtics during this time, to become the beat writer for the Boston Red Sox.  While he didn’t regret his decision to cover baseball, it is clear that Shaughnessy truly enjoyed his time covering this all-time great team.

More than just writing about the team’s accomplishments, in both this book and his articles and columns for the Globe, Shaughnessy’s best work comes when he writes about the players, their stories and their personalities. One great story is when Bird had his right hand taped in a practice due to an injury, Shaughnessy decided to try to win a bet with him by challenging him to a free throw contest – 100 shots for each one with Bird’s hand remaining taped.  Without giving away any more, just assume that it finished the way the reader will think it will.

The excellent prose on players is especially brought out in later chapters for the 1985-86 season when Bill Walton joined the team.  It almost felt like that team was all about a backup center instead of one of the best frontcourts in NBA history with Bird, Robert Parish and Kevin McHale.  That is quickly forgotten when the reader learn just how happy Walton was to be part of the team and how upset he was with himself when he felt responsible for the first loss of the season by the Celtics.  Bird immediately told him to forget about it and then told “Scoop” Shaughnessy that he didn’t think that he could endure that for a full season.

“Scoop” was a nickname given to the author by the team, not necessarily a term of endearment as Shaughnessy was not only a new writer for the Globe but he was also among the first sportswriters who would be more than just a buddy with the players who would write only fluff pieces or game recaps.  Some of the players, most notably Parish, would freeze Shaughnessy out or shun him on the buses or planes (at the time, media covering the team would travel with them).

However, this book is not just about the player’s lives or the social issues of the time – it is also a very good account of some of the basketball played as well, especially the two times during this time when the Celtics faced the Lakers in the NBA finals. For readers who enjoyed professional basketball during this era will love reading about those epic finals when the two main figures in the sport met to decide the championship.  As one of those readers that fall into this category, I believe that the title apply to both the book and that era of Celtics basketball – wish it lasted forever.

I wish to thank Scribner Books for providing a copy of the book via NetGalley in exchange for an honest review.

Review of "The Commentators"

This is the perfect book for sports fanatics like me, who enjoy and follow a large variety of sports, as this book covers 20 different sports with many memorable moments.  Here is my review of "The Commentators" 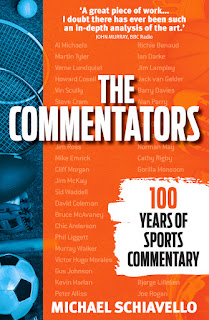 Title/Author: “The Commentators: 100 Years of Sports Commentary” by Michael Schiavello

Review: When a book is published about various sports and one aspect that ties them together, there will usually be some fantastic stories to go along with the topic at hand.  It helps when the author is considered to be a good authority on the topic and for both of these, Michael Schiavello fits in this far-reaching book on the world of sports broadcasting.

The book is far-reaching simply due to the sheer number of sports that Schivaello writes about, 20 in all from cricket to horse racing, from American football to football as the rest of the world plays it.  Because his work is done in the United Kingdom, some of the longer and more detailed descriptions are for sports popular there such as football (soccer) and cricket, but he does a wonderful job of covering American sports as well.

Good examples of his attention to the broadcasters of American sports are the excellent write-ups he provides on two legendary commentators in their respective games, Vin Scully (baseball) and Mike "Doc" Emrick (ice hockey).  Even though he many not follow those sports closely, he does a nice job of writing about two of the best and their descriptions of the games.  In particular, his writing of Scully's call of the perfect game pitched by Sandy Koufax in 1965 was a masterpiece.  It would be hard to do justice in the printed word to Scully's wonderful call of that game, but the writing about Scully's call in the 9th inning is a must-read passage.

Schiavello, himself no slouch when it comes to sports broadcasting and the variety of events he has covered (including oyster shucking), has written a book that any sports fan should read, even if they may not be interested in some of the games.  It is also recommended to find the calls written in the book on YouTube so that the audio can be experienced as well if the reader has not heard the call previously.  No matter one's sports interest, one is sure to find something to enjoy in this book.

I wish to thank Wilkinson Publishing for providing a copy of the book via NetGalley in exchange for an honest review.

Posted by Lance Smith at 9:15 AM No comments:

Review of "Racing While Black"

I finished this book with some unexpected excellent time.  The day I finish this very good book on the experiences of a Black racing team trying to break into NASCAR was the day that Bubba Wallace became the second Black driver to win a race in NASCAR's Cup Series. The review may be short, but it is a book that is well worth the time to read. 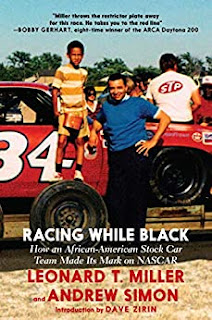 Title/Author:  "Racing While Black: How and African-American Stock Car Team Made Its Mark on NASCAR" by Leonard T. Miller and Andrew Simon

Review: Author Leonard T. Miller, whose father passed down his love of motorsports to his son, wanted to channel this enthusiasm to create an all-Black racing team to compete in NASCAR.  While they knew they would face many challenges, both financially and socially since the sport was still considered one for the "good ol' boys" in the southern United States, he nonetheless sunk much time and money recruiting people, cars and engines to make this dream a reality.

Reading about his struggles, while not unexpected, were still eye-opening. Miller Racing's biggest issue, which makes up the bulk of the book, was trying to obtain sponsors, a must for any racing team. There were the encounters with racist fans, the hesitation by white sponsors when Miller was making his pitch and even resistance by Blacks in higher class statuses, questioning Miller's wish to mingle with "rednecks."

There is so much more to the book and Miller's struggles than just sponsors and their money, or racists (overt and subtle) and the barriers they create. There are great racing stories, stories about work and disagreements in the garage, and even some name dropping aside from racing, such as Jessie Jackson when for a brief time, he assisted Miller and his chase for recognition in the sport.  The story is one that has a mixed ending as well as the usual ups and downs one would expect for this type of book.  Anyone interested in learning more about the hustle for sponsors, drivers and crew members will like this book. While it does focus on the experience facing Black's in racing, it still is a good exposure to the entire business aspect of racing.

Posted by Lance Smith at 5:42 AM No comments: