Review of "Racing to the Finish"

While I never considered myself a big fan of Dale Earnhardt Jr when he was racing, I was interested in what he had to say in his memoir, especially as his retirement in 2017 was due to concussions.  It was a great read.  Here is my review of "Racing to the Finish" 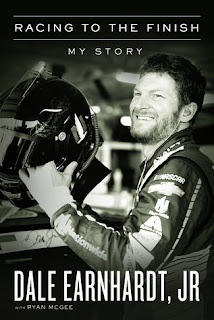 Title/Author:
“Racing to the Finish: My Story” by Dale Earnhardt, Jr. with Ryan McGee


Review:
When one thinks of concussions and sports, American football immediately comes to mind, but athletes other sports have risks of concussions and the long term effects as well. One of these sports is auto racing, as drivers may suffer concussions from crashes or even bumps against the wall or other cars. This was the case for Dale Earnhardt Jr. as he first exhibited these symptoms in 2012.  His memoir explains what happened that day in Kansas and what he went through for the next five years, leading to his decision to retire from racing in 2017.


This is far from the typical sports memoir. Earnhardt focuses exclusively on the time period from 2012 to 2017 and focuses on his concussion, his treatment and how that affected his personal and racing life. What makes this book so different than others on concussions in sports is that the effects are explained in plain language without a lot of medical jargon. The writing is heartfelt and personal as the reader will feel like he or she is right there with Earnhardt, not only in the car or in the garage with his crew but also a the doctor office or doing the exercises he had to do to recover.


While there is some material about Earnhardt in his car on the track and stories about other racers such as Martin Truex Jr. and of course his father, the book is less about racing or NASCAR and more about the personal struggles he endured.  He talks about crying (he says he only did so three times in his life), his decision to retire and the personal relationships he had with many people – not just his wife but other family members, his physician and the manager of Hendrick Motor Sports, the team he was racing for at the time of his retirement.


This book deserves a high rating for not only the personal touch of the writing, but also the message that is tells about concussions.  While readers may very well have heard this message before, it is one worth repeating and if even if the book helps one person through his or her struggle with this injury, then Earnhardt’s reason for writing the book will be fulfilled.


I wish to thank Thomas Nelson-W Publishing for providing a copy of the book via NetGalley in exchange for an honest review.