Review of "Beyond Broadway Joe"

It's hard to believe that it has been nearly 50 years since the New York Jets shocked the sports world and upset the Baltimore Colts in the third edition of the NFL-AFL Championship Game (it wasn't called the "Super Bowl" yet). This book is one of the most complete books about that team around.  Here is my review of "Beyond Broadway Joe" 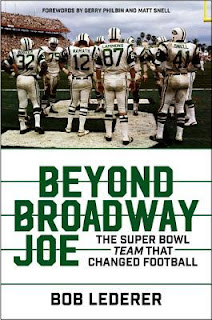 Title/Author:
“Beyond Broadway Joe: The Super Bowl Team That Changed Football” by Bob Lederer
Tags:
Football (American), professional, Jets, history, championship
Publish date:
September 11, 2018
Length:
416 pages
Rating:
4 of 5 stars (very good)
Review:
Even the most casual of football fans, no matter their age, know the story of Super Bowl III.  The New York Jets of the upstart American Football League were 17 point underdogs to the Baltimore Colts, champions of the well-established National Football League. The brash quarterback of the Jets, Joe Namath, guaranteed a Jets victory and his team delivered, scoring a 16-7 upset over the Colts and gave the newer league credibility.
However, it takes a team to win a championship in football and that means every member of that team makes contributions to the success that led to the victory. Author Bob Lederer focuses on those other players on the 1968-69 New York Jets and provides stories and insights into those other players as well as Namath, head coach Weeb Ewbank and owner Sonny Werblin – those three individuals are also given their due as the book profiles them after the initial chapter describing the game.
It isn’t easy to compile a collection of stories about football players who either play unglamorous positions (every offensive lineman, for starters), are back-ups at their position and see little game action (such as Namath’s back-up, Babe Parilli) or are now deceased and therefore could not share their recollections firsthand to the author. Nonetheless, Lederer does a wonderful job of writing about each of those “other” players. Not only does he mention the role each player had in making the Jets the champions (even if that player did not appear in the Super Bowl), he provides interesting facts about their professional and personal lives. One common theme for each player was camaraderie as it was clear from reading these stories that these men felt they were a total team and would do anything for each other.
Each player was also graded by the Jets coaching staff on their effort and skills and this grade was explained by the author. Coach Ewbank had report cards for each player and many of these were shared and explained in the book. Hard core football fans will thoroughly enjoy these reports as they will provide insight into just how good this Jets team was and help provide evidence to argue that the victory by New York was not as big an upset as history has told us. Fans of a more casual nature may not catch on to each of these nuances but they still help explain how good a TEAM they were.
This is a must-read for readers who are Jets fans or pro football history buffs. It does provide a different and refreshing viewpoint of a very historic team and game.
I wish to thank Mr. Lederer for providing a copy of the book in exchange for an honest review.
Book Format Read:
Hardcover
Buying Links:
https://www.amazon.com/Beyond-Broadway-Joe-Changed-Football/dp/0062798049/ref=tmm_hrd_swatch_0?_encoding=UTF8&qid=&sr=
https://www.barnesandnoble.com/w/beyond-broadway-joe-bob-lederer/1126895902?ean=9780062798053#/