Review of "The Greatest Athlete (You've Never Heard Of)"

Not every great athlete will achieve a lot of fame and recognition, but it would be hard to find any successful athlete who has been in relative obscurity than George Orton, the first native of Canada to win an Olympic gold medal.  The story of his life in sports and beyond is one that should be read.  Here is my review of an upcoming book on this remarkable man. 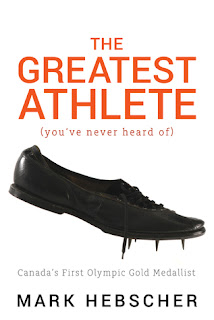 Title/Author:
“The Greatest Athlete (You’ve Never Heard Of): Canada’s First Olympic Gold Medalist” by Mark Hebscher
Tags:
Track and Field, Summer Olympics, biography, ice hockey
Publish date:
March 12, 2019
Length:
240 pages
Rating:
4 of 5 stars (very good)
Review:
George Washington Orton was paralyzed by an accident until he was 10 year old, but once he gained use of his limbs, he rarely stood still again as he became a world-class athlete, winning a gold medal in the 1900 Summer Olympics held in Paris. His event was the steeplechase, which is no longer an Olympic event. He was competing at the University of Pennsylvania at the time, and was mistaken as an American competitor even though his native country was Canada.  His life story, including his life outside track and field, is a fascinating read and journalist Mark Hebscher brings it to life.
Orton achieved much of his success in track while attending Penn, becoming an elite runner and setting many records in several events.  He did participate in other sports and yet was able to keep his amateur status and participate in the 1900 Olympics. This drew comparisons by the author to Jim Thorpe, who later had to forfeit his Olympic medals because he played semi-professional baseball. Orton had no such issues with his Olympic amateur status, but instead he won his gold medal in a shroud of confusion. Was he American since he competes for Penn (and was instrumental in founding the world famous Penn Relays) or was he Canadian since that was the nation of his birth?
Along with this confusion, there was the matter of the lack of publicity for the Olympics at this time. The 1900 edition was only the second time the modern games were held and they took second fiddle in Paris to the World’s Fair.  Because of this, most fans and people who were interested in the Olympics did not obtain the information as they would later when the Olympics grew in size and stature.
While just the story of Orton’s rise in the world of track and field would be an interesting topic by itself, the complete life of the man is captured by Hebscher as he discusses many of the sports innovations inspired by Orton, such as putting numbers on the jerseys of football players. Orton was a tireless promoter, especially of hockey, as he was continuously working on making the sport popular in Philadelphia. He was instrumental in getting indoor rinks built in the city and even ran the Philadelphia Quakers, the first professional team in the City of Brotherly Love. While the team struggled in its only season, Orton is given credit for planning the seeds of interest in hockey as the Philadelphia Flyers are a very successful franchise in today’s professional game.
Orton’s accomplishments both in athletics and in other occupations such as teaching, writing books and sports business are all noted in fine detail in the book. All of this information came about because the author wanted to produce a documentary on the life of Orton as many Canadians did not know of his legacy and historical importance in the Olympics.  This was the only drawback of the book and only because the description of the author’s endeavors were scattered throughout the book.  All of this information would read very well in a foreword or afterword as it was important to the telling of the story. It just was inserted in places that interrupted the important information and that story – the story of George Washington Orton – is one that everyone with any interest in athletics should read.
I wish to thank Dundurn Publishing for providing a copy of the book via NetGalley in exchange for an honest review.
Book Format Read:
E-book (Kindle)
Buying Links:
https://www.amazon.com/Greatest-Athlete-Youve-Never-Heard/dp/1459743350/ref=tmm_pap_swatch_0?_encoding=UTF8&qid=1545611091&sr=8-1