Review of "Hockey Fight in Canada"

Sports fans have many different ways to channel their inner "nerd."  Some will do so by playing fantasy games. Others will pour over advanced statistics in their favorite sports.  For me, my inner sports nerd is exposed by reading books on the business side of sports. It is that reason that I was intrigued by this book on the recent massive contract paid by Rogers Communications for the Canadian broadcast rights to the NHL. It was a great book for this release.  Here is my review of "Hockey Fight in Canada" 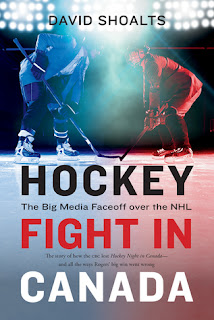 Title/Author:
“Hockey Fight in Canada: The Big Media Faceoff over the NHL” by David Shoalts
Tags:
Ice Hockey, professional, business, broadcasting
Publish date:
September 29, 2018
Length:
224 pages
Rating:
5 of 5 stars (outstanding)
Review:
“Hockey Night In Canada” has been a Saturday night tradition in the country for over 60 years.  The government-run Canadian Broadcasting Corporation (CBC) had the broadcasting rights for decades, but in 2014 Rogers Communications paid 5.2 billion dollars to gain the exclusive broadcast rights for NHL hockey games for the entire nation, including “Hockey Night in Canada.”  How this deal did not go exactly as planned for Rogers, as well as the wheeling and dealing behind the scenes by all parties involved are told in this excellent book by veteran Toronto sportswriter David Shoalts.
There were many reasons given by the author as to why the CBC lost the rights to “Hockey Night”, but the biggest seemed to be complacency. Since the program has been such a staple in the country and was aired on the one broadcasting network that covered the entire nation, it was figured that they would simply be awarded the next contract.  Like all other television networks, CBC was losing viewers as more people looked to cutting the proverbial cord and view programs on other platforms. Rogers was experiencing similar issues, especially with a drop in cable subscriptions, but was confident they could satisfy the wants of the NHL to expand viewership of its product on other digital platforms. This eventually became a winning strategy as Rogers beat out not only CBC but the other major Canadian broadcaster, Bell Canada.
When Rogers won the contract, it controlled all aspects of hockey broadcasts in Canada, with many games broadcast on its SportsNet regional networks. However, in a deal reached with the CBC, the latter was allowed to continue to broadcast “Hockey Night in Canada” but Rogers called all the shots – they collected all the revenue from advertising as well as forcing CBC into other concessions.
These concessions included a major change in the on-air talent. Popular (at least with viewers) long-time host of “Hockey Night”, Ron McLean, was replaced with George Stroumboulopoulos.  While he was considered more “hip” and the set for “Hockey Night” had been modernized by Rogers, Stroumboulopoulos never seemed comfortable in his new role.  McLean had not disappeared, however, as he still teamed up with Don Cherry on the very popular “Coach’s Corner” segment.  However, even that was affected by Rogers as they cut the amount of air time for the very popular coach and, like with any other topic, Cherry wasn’t afraid to air his opinion of the situation.

Complaints about “Coach’s Corner” was just one of a myriad of issues Rogers had with its contract. The information about all the other problems and issues that affected the ratings and telecasts was compelling and made the book a very lively read about a topic that normally would not be considered exciting reading material.  In a very short summarization of the first two years of the contract, Rogers’ ratings over all its services for hockey would depend on two factors – the success of the seven Canadian teams in the league (in 2016, none of the seven teams would qualify for the playoffs and the ratings tanked) and more specifically, the success of the Toronto Maple Leafs. To illustrate the power the Maple Leafs have on the broadcasting fortunes in Canada. The 2016 draft in which the Maple Leafs selected Auston Matthews drew higher ratings than any series in the playoffs that year, including the Stanley Cup Finals.
Information like this is why any reader who enjoys reading about sports business or broadcasting will thoroughly enjoy this book. It is a fascinating look at the cutthroat nature of negotiating for broadcasting rights for live sports, which are still in high demand today.
I wish to thank Douglas and McIntyre for providing a copy of the book in exchange for an honest review.
Book Format Read:
E-book (PDF)
Buying Links:
https://www.barnesandnoble.com/w/hockey-fight-in-canada-david-shoalts/1129325346;jsessionid=568717F0E8EA90CB8BA5118D8C2571FA.prodny_store01-atgap06?ean=9781771622042&st=AFF&2sid=Goodreads,%20Inc_2227948_NA&sourceId=AFFGoodreads,%20Inc
https://www.amazon.com/gp/product/1771622040/ref=x_gr_w_bb?ie=UTF8&tag=x_gr_w_bb-20&linkCode=as2&camp=1789&creative=9325&creativeASIN=1771622040&SubscriptionId=1MGPYB6YW3HWK55XCGG2