Review of "Sudden Death: The Incredible Saga of the 1986 Swift Current Broncos"

When a member and author in the hockey books Facebook group I belong to posted a note about this book on the 30th anniversary of this bus crash on December 30, I knew that I wanted to find out more about this event.  Being an American who is not familiar with the Canadian Junior leagues, I only knew that this bus crash killed four players and the team had many future NHL stars.  Reading about it was an eye-opener - I am grateful for Todd Denault for bringing this book to my attention. 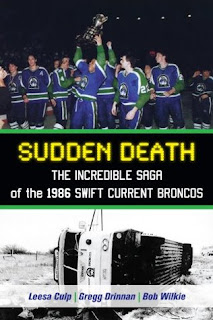 Title/Author:
“Sudden Death: The Incredible Saga of the 1986 Swift Current Broncos” by Leesa Culp with Gregg Drinnan and Bob Wilkie

Review:
On December 30, 1986, a bus carrying the Western Hockey League’s Swift Current Broncos skidded off the Trans-Canadian Highway in a snowstorm, killing four of the team’s players. The Broncos are a Canadian junior team in which the young men are teenagers with dreams of playing in the NHL.  A witness to the crash who also helped injured players, Leesa Culp, wrote this powerful book to tell the story about that night and some of the players who were on that bus.

There are many reasons that this tragedy is still remembered thirty years later. One is the sheer amount of talent on that team.  Five players were drafted by NHL teams, four of them (Joe Sakic, Peter Soberlak, Ryan McGill and Bob Wilkie) within the first 44 selections.  Another talented player on the team, Sheldon Kennedy, was also profiled in the book as well because the triumph of the team winning the 1989 Memorial Trophy as the best junior team only three years after the tragedy was overshadowed by his revelation that coach Graham James had been sexually abusing Kennedy.

That sad story is discussed at the end of the book and just like the crash, the story needed to be told. But it did not take away anything from the stories of the crash survivors, one of whom was a co-author of the book, Bob Wilkie. To read about what those young men endured without counseling and how they came back to not only finish the season but to start a championship run two short years later is truly amazing.

The four players killed (Trent Kresse, Scott Kruger, Chris Mantyka and Brent Ruff, younger brother of current Dallas Stars coach Lindsey Ruff) are always on the minds of the players throughout the book and each one has a brief write-up.  Because the book is about the surviving players and also Culp, who was invited to all reunions and events that involved the players on that bus, the stories were all the more moving in their authenticity and genuine emotion.

One last aspect of the book that I appreciated is that as an American hockey fan who is not familiar with the Canadian junior leagues, the book also was a good introduction to the player’s life in the juniors.  It talked about the billeting families, the travel and the practices.  Because these are young men in their teenage years, seeing it through their eyes as told to Culp was an education and has made me wish to learn more about these leagues.

Anyone interested in the Canadian junior leagues, this team or even just hockey in general will enjoy this book – highly recommended.