Review of "Pitching For Sanity"

An author whom I follow on Goodreads sent me a request to review this story, which is not normally the kind of topic on which he writes.  Having enjoyed every other book I have read of his, which are mostly baseball-related, I immediately said yes.  While this one also has baseball, it is not the central theme, but one that I did enjoy and wanted to share here.  This is my review of "Pitching For Sanity." 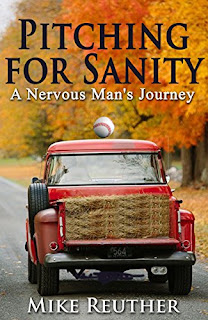 Review:
It isn’t often that a book will combine the themes of baseball and a mental health condition but this short novel by Mike Reuther does just that.  While there isn’t a lot of baseball in the story, it does play a key role as pitching baseballs is how the main character, Bill Barrister, deals with his anxiety. The condition has affected Bill enough that it ended his marriage and has affected his ability to work or do many other simple things that most people do.

A former pitching phenom whose tryout with a major-league team was a disaster, Bill was a career Air Force man where a colleague’s suicide left him shattered. That is one of the many events that led to his anxiety and each one is addressed in the story with a complete picture – a trait that illustrates the fine writing done by Reuther throughout the book.

Bill ends up leaving his Pennsylvania hometown to go on a road trip to California with his friend Godfrey. There are many twists in this journey which leads them to Texas where Bill learns a lot about his friend, a woman from their hometown whose son saw Bill throwing the baseballs, and also himself and how he can cope with his anxiety in other methods. The ending of the story was a bit surprising to me, but it is open enough so that the reader can draw his or her own conclusions. That fits the rest of the book – detailed enough to illustrate the situation, but open enough for the reader to fill in the blanks. A good quick read for those who like stories of self-discovery.

I wish to thank Mr. Reuther for providing a copy of the book in exchange for an honest review.