Only about a month to go until pitchers and catchers report - the four magic words that all baseball fans love to hear. Until then, baseball books are the next best thing and I picked up this one on the Tampa Bay Rays and how they went from laughing stock to serious contender.  Here is my review of "The Extra 2%" 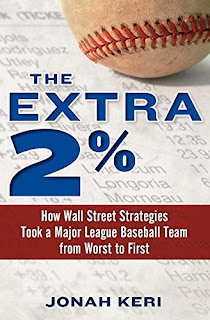 Title/Author:
“The Extra 2%: How Wall Street Strategies Took a Major League Baseball Team From Worst to First” by Jonah Keri

Review:
One of the best accomplishments a sports team can achieve is to jump from last place one season to first place the next.  In 2008, the Tampa Bay major league baseball club not only changed its name from Devil Rays to Rays, they jumped from fifth place to first in one of the toughest divisions in baseball, and then went on to capture the American League pennant. This book by Jonah Keri attempts to describe the strategies that the front office team of Stuart Sternberg, Matt Silverman and Andrew Friedman employed to take the team from worst to first.

The strategy of trying harder by that extra 2% in the title is not clear while reading or listening to this book. There is an exhaustive description of all the poor practices of the previous ownership team led by Vince Naimoli – everything from overpaying for aging sluggers to harassing fans who brought their own food into the ballpark. When the trio of former Wall Street businessmen take over, it is almost like the cavalry came in to rescue the Devil Rays.  While their record speaks for itself – improving by 31 wins from 2007 to 2008 – the way this was done did not seem to use Wall Street strategies.

Because of this, the book fell a little flat in that aspect as I expected it to have more groundbreaking strategies for building a winning baseball team.  Instead, Keri discusses the problems that Tampa has in generating revenue with a poorly located stadium, limited media revenue and poor luck in being in the same division as the New York Yankees and Boston Red Sox, two teams with huge revenue streams.  There is some “Moneyball” aspects, some wise drafting and investments and recognition that spending a lot of money on a bad team to gain a few more wins won’t improve long-range success.  While all of those were key reasons why Tampa Bay became a better team, none of it seemed like a breakthrough discovery that was expected.

There is one other topic that Keri discusses in depth, not only about Tampa Bay but other locations as well, and that is how baseball teams will extort cities and states to finance new ballparks with the threat to move. While this was very interesting material, what seemed a little off to me was that other teams such as the Florida/Miami Marlins and Minnesota Twins were discussed when this topic was covered instead of the Rays and what they are doing to try to get a new stadium.

Overall, this book was okay because the material is interesting and it is always good to hear success stories.  However, what was expected from the title and book description and what was actually presented were two different things which left me feeling a little disappointed when I completed the book.  This book is recommended for fans of the Rays, but if one wants to learn more about building a winning team, this isn’t the best source.