Review of "The Murder of Sonny Liston"

This week marks the 46th anniversary of the death of former heavyweight champion Charles "Sonny" Liston.  The man's death still makes people talk today - one person was even moved by this event to write a book that raises questions about the circumstances of his demise.  Here is my review of "The Murder of Sonny Liston." 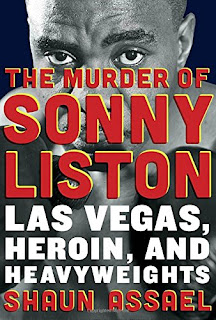 Review:
Charles “Sonny” Liston lived a mysterious life, whether it was when he was born but could not produce a birth certificate, his young adulthood when he was imprisoned, when he was rising through the ranks of boxing to become the heavyweight champion, when he lost to Muhammad Ali twice (with the second fight ending by some accounts due to a phantom punch) and later in his post-boxing life in Las Vegas. When he was found dead in his apartment by his wife Geraldine on January 5, 1971 the medical examiner declared Liston’s death to be due to “natural causes.”

This book by investigative journalist Shawn Assael casts doubts on this diagnosis and raises the question of whether the former champion was forced to overdose on heroin that led to his death.  In order to ask this question (Assael does not come to a definite conclusion that Liston was murdered), he writes a significant backstory about Las Vegas and the culture of the town at that time – mainly the drug, entertainment and criminal elements.  Even if the reader doesn’t care at all about Liston, boxing or sports, he or she will be fascinated with the detailed description of “Sin City” in that time period.

If one wants to read this to find out just who would want a former heavyweight champion dead, there is plenty of candidates for that as well.  The theories floated about in the book include thoughts that Liston knew too much about a) the drug dealers in Las Vegas, b) crooked police officers, or c) fixed fights, including his own in the second loss to Ali.  The list of suspects the author offers up is extensive as well, as he names these possibilities: An ex-girlfriend, a gaming player in Las Vegas named Ash Resnick, a rogue cop from the Las Vegas Police department, an informant and accomplice of said cop and even someone from the Nation of Islam.  There is even a “secret percent theory” told in which Liston would receive a portion of the receipts from all of Ali’s future bouts.  While the evidence that Assael has on each one makes for great reading, not one of these theories convince readers or even the author himself that they are definitive proof that Liston was murdered.

So while this may generate as many questions as it answers, this book is one of the more entertaining books about the time and the sport of boxing that I have read.  There is a decent amount of text about Liston’s fights as well.  The quality of that writing shows that Assael not only can write about 1960’s Las Vegas and the culture, but can also cover the action inside a boxing ring quite well. This book is recommended for readers who want to learn more about Liston or Las Vegas in that era.

I wish to thank Blue Rider Press for providing a copy of the book via NetGalley in exchange for an honest review.