As a runner, albeit a slow one, I always enjoy reading stories of other runners. I have nothing be admiration for the participants of this race, which was very well documented by Charles Kastner in this book. Here is my review for "The 1929 Bunion Derby." 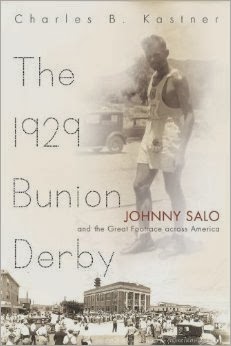 Review:
A nearly forgotten footnote in the history of running and foot races took place in the late 1920’s when the Bunion Derby was held.  The race was held in 1928 and again in 1929 and was a trans-American race in which the runners would run distances ranging from an “easy” day of about 30 miles to days when they had to cover nearly 70 miles of unpaved roads, unpredictable weather and treatment for injuries that inevitably occurred.  The races were a means of promoting businessman Charlie Pyle’s roaming vaudeville show and the runners were promised prizes when their trek that started in New York City would end in Los Angeles for the 1929 version.   Like many other events and businesses, they would not be held again after the Great Depression and were viewed as time passed as just another example of the excesses that were wasted before the stock market crash.

The book focuses on Pyle and four runners who held the lead through most of the event.   The reader will be taken back to a time when long distance running was very different than it is today.  Each day’s run is described with the conditions the men had to endure as well as the results and how they were able to cope with the adversity.   There are many personal stories about the runners or bunioneers as the author calls them that make the book a terrific read.   Also, while a lot of the focus of the book is on the frontrunners, there are great stories about other participants. One such runner is Eddie Gardner, an African American long distance runner who had to endure even more adversity than most of his competitors simply because of the color of his skin and the fact that some of the cities that the race went through were steeped in Jim Crow laws at the time.

The runners were aware that there was a distinct possibility that the promised prize money may not happen, as the book illustrates Pyle’s mishandling of funds for the race, his overly optimistic predictions of attendance and revenue his vaudeville show would produce (they traveled with the bunioneers) and his problems with creditors that resulted in vehicles being impounded and trouble finding lodging for his runners and show performers.  Through it all, the stories of how the runners kept on running out of sheer determination makes the reader feel like he or she is a part of the spectacle.   It is an excellent read that any fan or participant in the sport will enjoy.

I wish to thank NetGalley for providing a copy of the book in exchange for an honest review.

Pace of the book:
Very good.  It felt slow for a while, especially at the beginning when there was more historical content that wasn’t part of the race, the runners or the vaudeville show that toured with the runners.   But as the race continued, like some of the runners, the pace of the book picked up.

Do I recommend?
Yes, especially for history buffs and for those interested in long distance running.   In much the same way “Born to Run” brought a new appreciation to long distance running, the reader will certainly have much respect and admiration for those athletes who daily ran distances longer than a marathon, sometimes more than TWO marathons.