Earlier I reviewed a book about sports rivalries, "Love Thy Rival."   One of the rivalries mentioned was Duke-North Carolina basketball.   I found this book on that rivalry in the library, so naturally I was curious.  I am glad I picked it up, as it was a very entertaining read.   Here is my review of "To Hate Like This." 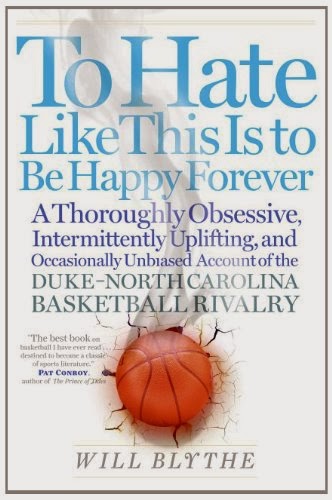 Title/Author:
“To Hate Like This Is To Be Happy Forever” by Will Blythe

Review:
College sports are filled with rivalries that evoke passions that otherwise are not shown by some people. Will Blythe writes about one of these emotions that he otherwise would not admit to having, hate, as a result of the rivalry between the Duke University men’s basketball team and his favorite team, North Carolina.

The book is mostly personal stories about the times he would talk about and watch the games with his parents. The stories where he and his mother are watching the game and her pessimism until the final horn are priceless. I especially like Blythe’s description of what she would do after a particularly upsetting loss to calm herself down.   The stories where he interacts with his father are touching and written from the heart.

There are also recaps of games during the 2004-05 season.  However, these do not read like typical recaps in a newspaper or reporting book.  These are where the stories are with his parents or other people with whom he watched the game.   Also, these recaps often resulted in other stories about players, coaches or others who were a part of the action.   He doesn’t only write about North Carolina players and coaches.   He did include some Duke stories as well that were not spiteful or mean.  In fact, my favorite story in the entire book was about Duke shooting guard JJ Reddick and it was a very flattering piece on the player.

The book’s selling point is the humor, and the first chapter sets the tone.  It made me cry a couple times because I was laughing so hard.  Even the title of that chapter, “The Object of My Affliction” made me chuckle.   While this book would be best for North Carolina fans, any fan of college basketball will be entertained by reading it.

Pace of the book:
Very good.  A few of Blythe’s stories about other people slowed down the book briefly, but his own stories and his accounts of the Tar Heel games were fast.

Do I recommend?
Yes, I do to fans of college basketball and especially of North Carolina.