Review of "The Fight of Their Lives"

I was fortunate enough to receive an advance review copy of this book about one of the more memorable but ugly incidents in recent baseball history.  But instead of focusing on the fight, this book is a very good illustration of not only friendship and forgiveness, but also of what life was like for minority baseball players in the 1960's.  Here is my review of "The Fight of Their Lives" 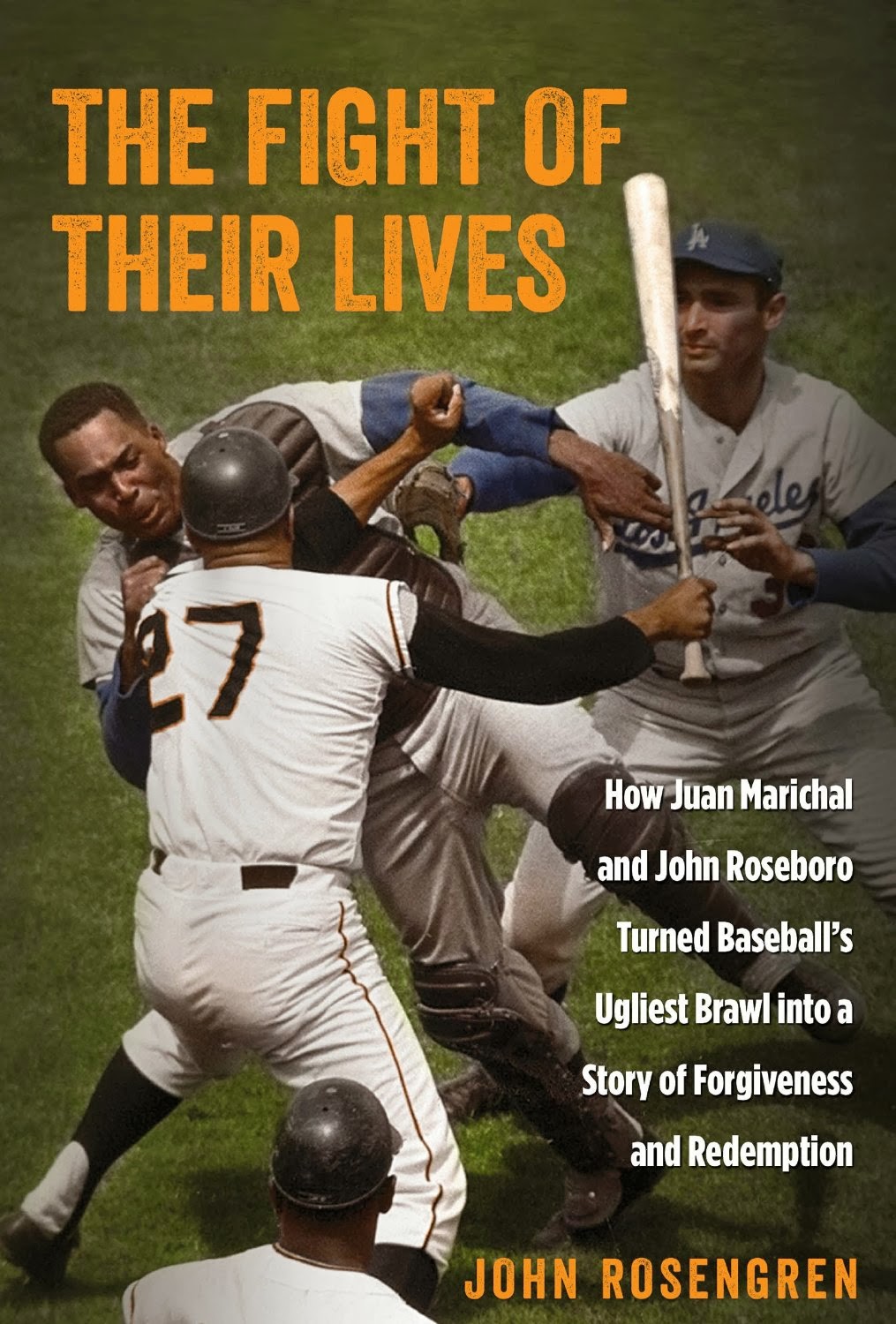 Title/Author:
“The Fight of Their Lives” by John Rosengren

Review:
On an August day in 1965, a baseball game between two arch rivals, the San Francisco Giants and the Los Angeles Dodgers, would contain one incident that would forever define two of the players. After dropping a pitch thrown by Sandy Koufax, Dodger catcher John Roseboro threw the ball back very close to the head of the batter, Giants pitcher Juan Marichal. Marichal took offense to the gesture and soon he and Roseboro would be engaged in a fight. However, this was not the run-of-the-mill baseball fight.  Marichal, holding his bat during the entire event, struck Roseboro with the bat. Instead of making contact with his skull, the bat hit Roseboro’s shoulder but did strike near the eye resulting in bloodshed.

The incident would affect the two men long after the fight, and this book by John Rosengren explores not only the two men’s lives after that incident, but it also takes a look at the paths both players took in their baseball careers.  Their stories reflected American attitudes and actions toward people of color at the time.  While one player was black and the other Latino, they both faced prejudices and exclusion (sometimes by their own teammates) while playing in the major leagues.  Other books have addressed this topic and the struggles of black and Latino players, but Rosengren’s account illustrates how it was even more difficult for these two players because of their upbringing and beliefs.   Because both players held back any anger or hatred they may have felt, it made the account of that fateful day in August 1965 even more shocking.

The societal upheaval is used as a backdrop in this part of the book and here again, Rosengren does an excellent job of weaving it into the accounts of the baseball players.  In fact, the fight came just days after the Watts riots of Los Angeles, something that was still heavy on Roseboro’s mind during that game with the Giants.

However, Rosengren saved the best for the second half of the book as the two men eventually forgave each other and became friends. The fight was something that haunted both men for many years, including well after their baseball careers ended.  The account of how Marichal felt that the fight was being held against him when he became eligible for election to the Baseball Hall of Fame and his plea to Roseboro for help was the best section of the book.  Rosengren paints a wonderful picture of Roseboro reconciling with Marichal at a charity golf tournament and showing his forgiveness by campaigning successfully for Marichal’s election.   That chapter, along with quotes by Marichal at his induction ceremony and at Roseboro’s funeral in 2002, made this book a wonderful story of redemption, forgiveness and friendship.  A book that goes well beyond the baseball, it is one that any fan of baseball or stories of friendship will enjoy.

I wish to thank Mr. Rosengren for providing a copy of the book in exchange for an honest review.

Pace of the book:
Excellent.  The chapters flew by as I was reading them as the stories of both men were told in a manner that was just right.  The writing was smooth and flowed easily without being too detail oriented but informative enough for the reader to learn more about Marichal, Roseboro and the turmoil of the times.

Do I recommend?
Yes, especially for baseball fans who like to read about players or events from the 1960’s.  That decade is considered by many to be the best in the sport’s rich and colorful history.  This book puts a new chapter into one of the uglier yet enduring moments of that decade.
Book Format Read:
Hardcover