Review of "Starting and Closing"

I found this book while browsing on the Web site of the New York Public Library, and always having enjoyed watching John Smoltz pitch, I thought I would give it a try.  Here is my review of "Starting and Closing." 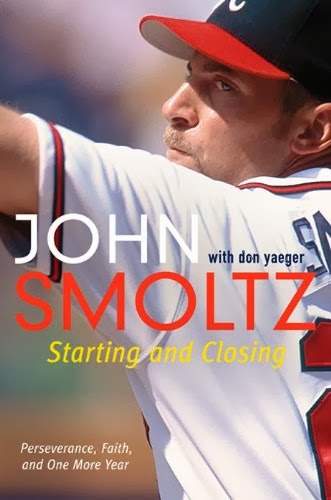 Title/Author:
“Starting and Closing: Perseverance, Faith and One More Year” by John Smoltz and Don Yeager

Review:
John Smoltz was an integral part of the Atlanta Braves franchise that won 14 consecutive division titles between 1991 and 2005. For a portion of that stretch he was considered one of the “Big Three” in the Braves starting rotation of Smoltz, Greg Maddox and Tom Glavine.

As is the case for many pitchers, injuries forced him to rethink his priorities in life and what he wanted to do. One of them was whether he should transition to the bullpen and become the closer for his team instead coming back from injury as a starting pitcher.This autobiography shares that decision Smoltz made, as well as his life and baseball career.

The book does not follow the typical timeline of a biography or memoir that starts with childhood, the revelations and decisions made during the teenage and young adult period, then the accomplishments and struggles during adult life. This book does take you through many of those times, but at different points. Most of the book deals with Smoltz’s baseball trials and tribulations. Those are good passages, and some of the ways he deals with his numerous injuries are good lessons for us all.

Included in handling those situations are Smoltz’s dedication to his faith so readers who are not comfortable with that topic may want to steer clear of it. He also talks about other aspects of his life such as fatherhood, divorce, finding love again and how he handles those while trying to keep his baseball career going after his surgeries.

I just couldn’t get into a nice rhythm trying to read this book. I did finish it, and I was always a fan of Smoltz while he was pitching. In fact, I was hoping he could make it to 150 saves during his time as a closer so that his numbers would be helpful in a future Hall of Fame vote. However, that didn’t help me while trying to piece everything together while reading the book. Fans of Smoltz or the Braves will like this book, but overall, it falls a bit short when compared to other baseball biographies I have read.

Pace of the book:
Uneven. The book skips around between Smoltz’s baseball career, youth, personal life and faith stories too much without much connection or a good chronological line. His baseball career mostly followed that, but even there it skipped at times and as a result, I had a hard time following it.

Do I recommend?
Fans of Smoltz or the Atlanta Braves will enjoy this book. For those who are baseball fans in general or like biographies, this has possibilities.