Review of "They Bled Blue"

Currently one of the better teams in baseball is the Los Angeles Dodgers. Fans of the game know that the Dodgers have a rich history and this book describes one of their championship seasons, 1981, with great prose.  Here is my review of "They Bled Blue" 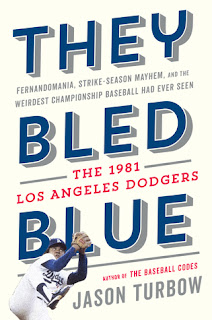 
“They Bled Blue: Fernandomania, Strike Season Mayhem and the Weirdest Championship Baseball Had Ever Seen: The 1981 Los Angeles Dodgers” by Jason Turbow


1981 has been remembered as one of the strangest baseball seasons in the history of the game. The season was split in two due to a player’s strike and the division winners in each half made the postseason, even though that meant the two best overall teams in the National League missed the playoffs.  A rookie pitcher who had a body that was closer to resembling a keg than a six pack took baseball by storm. Four infielders who had played together for nearly eight years were on their last quest together.  The link for the last two points was the Los Angeles Dodgers, who ended up as the champions in three exciting postseason series. Their quest to the championship is documented in this breezy, fun-to-read book by Jason Turbow.


While the book reports on the 1981 Dodgers season in chronological order, it is not the typical “this happened, then that happened” type of season recap.  It actually starts in 1978 when the New York Yankees defeated the Dodgers in that year’s World Series, winning the last four games after Los Angeles won the first two. That plays as motivation for many of the players who were on that team, including the four infielders who had been on the team and playing nearly every game since 1973.  Along the way the reader will learn a lot about all four of them – first baseman Steve Garvey, second baseman Davey Lopes, shortstop Bill Russell and third baseman Ron Cey.


However, the best personal story in the book was also the best baseball story of that year. Turbow does an excellent job of bringing the reader into the world of Fernando Valenzuela, a 20 year old rookie pitcher with a portly body, a lack of ability to speak English and a devastating screwball. He won his first eight decisions with an ERA under one and took the baseball world by storm.  Being of Mexican heritage, he became a hero to the Mexican population in Los Angeles, which makes up a significant portion of the city’s residents.  How he handled this fame, especially when he was a guest of President Ronald Reagan at the White House, was the best reading in the book, along with stories about manager Tommy Lasorda.


The book was capped off by providing an excellent account of the Dodgers’ postseason run.  In the Division Series (only made possible by the split season) they fell behind the Houston Astros two games to none in the best of five series, only to win three straight to capture the series. Then, in another best of five series, they defeated the Montreal Expos in thrilling fashion with Rick Monday hitting a homer to win the game for Los Angeles in the ninth inning of game five. Then the Dodgers made the three year wait to face the Yankees again worth it, defeating them in six games in the same manner as New York won in 1978 – lost the first two games, won the next four. The description of the games, the players’ emotions and the joy of the entire city was well written.


Dodger fans will want to add this book to their collection as it is very likely the best source of information on that crazy championship season for them.  Baseball fans and historians who are interested in that team should pick it up as well.


I wish to thank Houghton Mifflin Harcourt for providing a copy of the book via NetGalley in exchange for an honest review.