While real life has gotten in the way of posting as frequently as I did earlier, this memoir that includes just as much as the subject's real life as well as his sports career is a very good read.  Here is my review of the memoir of former heavyweight boxer Gerry Cooney. 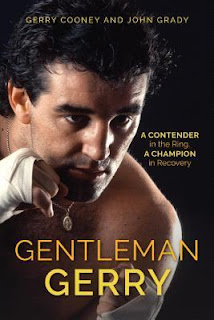 Title/Author:
“Gentleman Gerry: A Contender in the Ring, A Champion in Recovery” by Gerry Cooney with John Grady

Review:
Gerry Cooney was one of the most exciting contenders for the heavyweight boxing title in the early 1980’s.  This was during an era when that title was one of the most prestigious in all of sports. While there was much written in newspapers about his rise to contender, his loss to one of the greatest champions, Larry Holmes, and his subsequent lack of bouts, there was an inner darkness in Cooney’s life.  That darkness is addressed, as well as his career, in this memoir written with John Grady.

As a youngster, Cooney suffered abuse, both physically and mentally, from his father. When he became a teenager, Gerry (which is what he is called throughout the book – never “Cooney”) sought refuge in boxing. That became a wise choice as he had a very successful amateur career which translated into similar success in the professional ranks, culminating in a bout for the heavyweight championship with Larry Holmes. While Holmes won the bout with a technical knockout in the 15th and final round, Cooney won much praise for his performance. However, he had very few fights after that one for reasons varying from his lack of trust of promoter Don King to his managing team looking for bigger paydays, to Cooney’s personal battle with alcohol and drug addiction.

The latter issue plays a very big role in the shaping of Cooney’s story, as well as the abuse he took from his father as that is mentioned throughout the book.  At times, the same points are repeated multiple times, but they are included to illustrate how much these issues affected Cooney in his personal and professional life. Grady’s background as a mental health and addiction counselor provides valuable insight into the troubles Cooney faced. With the balance of material on both Cooney’s personal and professional lives, this is a very good book for fans of boxing or memoirs.