Review of “My Dad, Yogi”

While it is not uncommon to see books written by sons about their fathers, it isn’t often one will be written by a former major league player written about his father who is beloved by many, including non-baseball fans.  Here is my review of “My Dad, Yogi” by Dale Berra. 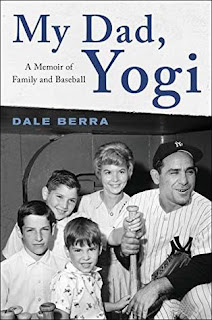 Title/Author:
“My Dad, Yogi: A Memoir of Family and Baseball” by Dale Berra

Review:
Whether or not one is a baseball fan, it is likely that person knows who Yogi Berra is. Many remember him as a Hall of Fame baseball player for the New York Yankees who also managed both the Yankees and New York Mets to the World Series.  Maybe the person knows Yogi from his famous quotes that are humorous and still repeated by many now, more than three years after his death. Whatever the reason, people still love the man. One of his three sons, Dale, also became a major league player and has written a memoir about the entire Berra family that will tug at heartstrings and also show a side of Yogi that many people may not know.
Dale writes about his father during his childhood years as a man who, while he didn’t say it often, would know that his children are loved by him. Dale and his brothers Tim and Larry were all fine athletes but only Dale made it to the big leagues.  If there is a downfall to this book, it is that Dale will write long passages about himself instead of Yogi, Carmen and his brothers, especially about his battle with drug addiction. That will be a disappointment to readers like myself who wanted to read only about the entire family.
However, what he DOES write about his parents is excellent.  The story of how his father met Carmen, who would become Yogi’s wife (Yogi felt he married up by wedding Carmen) was beautiful as well as the exchange between Yogi and Dale that the latter said was what would get him through another day:
“You all right, Kid?”
“Yeah, Dad, I’m all right”
“That’s all I want to hear, Kid.”
While this was the best of the stories, there are plenty of other fine stories about Yogi and the family as well.  The day that Yogi decided to end his self-exile from Yankee Stadium 15 years after being fired as Yankee manager is one.  The intervention called by Carmen after Dale was arrested for drug possession and usage years after they thought he was over his addiction was eye-opening.  Even in Dale’s younger days when he would be excited to be in the same clubhouse as star players on the Mets that his dad was managing such as Tom Seaver and Willie Mays, the stories would be fun to read.
This book does give a reader insight into the Berra family that other books don’t and when that insight comes from a family member, it gives it even more credibility.  Despite the long passages about Dale himself, this book nonetheless is a worthwhile addition the library of anyone who is a fan of Yogi Berra.

I wish to thank Hachette Books for providing a copy of the book via NetGalley in exchange for an honest review.