As a teenager, I loved to see the Minnesota Kicks in the old North American Soccer League.  When I saw a book had been written about the league, I immediately requested a review copy - sadly, my request had been declined.  However, patience was a virtue as five years later, I found the book on sale and immediately snapped it up and it was very good.  Here is my review of "Rock 'n' Roll Soccer." 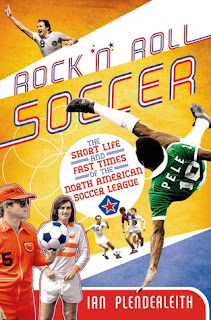 Publish date:
September 1, 2014
Length:
368 pages
Rating:
4 of 5 stars (very good)
Review:
Soccer fans who enjoy Major League Soccer may not be aware that there was another professional soccer league in North America that also saw success at the box office and on the pitch, albeit for only a brief time. The history of this league, the North American Soccer League (NASL) is captures in this very objective and factual book by Ian Penderleith.

In the 1970’s and early 1980’s, the NASL brought the sport’s international superstars to American shores and the public loved it – at least for a few years. The New York Cosmos were the glamor franchise of the league, achieving that crown when they signed Pele, considered to be one of the greatest players in the history of the game. However, the Cosmos weren’t done as they added other superstar players such as Franz Beckenbauer and Giorgio Chinaglia.  Given this, it would be easy to have the book and league’s history focus on just the Cosmos.

Fortunately, Plenderlieith didn’t do that.  Instead, he pieces together stories and information on other teams that may not have had the glamour of the Cosmos, but nonetheless contributed to the culture of the league.  The appropriately-named Tampa Bay Rowdies, who had their own flamboyant star in Rodney Marsh, brought entertaining soccer to the fans. Offering free parking for their fans who often preferred the tailgating parties to the soccer inside the stadium, the Minnesota Kicks also were one of the more successful franchises in the league both in attendance and on the pitch, despite the fact that they never won a championship and appeared in the Soccer Bowl (the NASL championship game) only once, during their first season in 1976. By including passages about teams like the Kicks and Rowdies, and their players such as Alan Merrick and Marsh respectively, Plenderlieth paints a complete picture of the league to the reader – at least of those successful franchises.

The demise of the league and the reasons have been well-documented elsewhere – the league expanded to too many teams too fast amd the ownership groups did not have the capital to invest in a losing business for the long haul.  Plenderlieth takes a level headed approach at these issues and doesn’t lay a lot of blame on any one person, but doesn’t make excuses or sugar-coat the problems that the league faced.  Instead, he simply reports what happened.

The NASL also was at odds with the governing body of the sport, FIFA, over several rule variations it made to make the game more entertaining to fans.  Correctly believing that American sports fans would not take to a game that had very little scoring, the league made two radical rule changes. One had to do with standings and the points awarded.  The usual point allocation for a match was three points for a win, one point for a draw and none for a loss.  Instead, the NASL awarded six points to the winning side, three for a draw and win or lose, a bonus point for each goal scored up to three per match.  This gave teams incentive to try to keep scoring throughout the game. Also, the pitch had a 35 yard line on each side – offiside could not be called on the offensive team until it was past that line instead of midfield as was the case elsewhere.  While these rules went by the wayside when the league disbanded in 1984, the offensive style of play it encouraged is still felt today as clubs realize that more goals mean more fans in the stands.

The meteoric rise and spectacular crash of the NASL is a compelling story and this book is one that anyone who has memories of the league, as this reviewer does (a Minnesota Kicks season ticket holder for two seasons), will want to add this book to his or her library.