Review of "The Perfect Pass"

The last book I read on our recent vacation was appropriate for the time, as I started it on Super Bowl Sunday and finished it on the train ride home, two days after watching one of the most exciting football games, let alone Super Bowls, I have ever seen.  Of course there were a lot of passes thrown in the Patriots' win over the Falcons - this book is a terrific one on the history of the passing game and one coach who saw the benefits to a pass-first offense.  Here is my review of "The Perfect Pass." 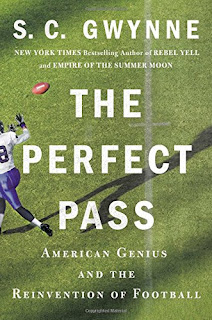 Title/Author:
“The Perfect Pass: American Genius and the Reinvention of Football” by S.W. Gwynne

Review:
No matter what level of football a fan follows, it has become very clear that the forward pass is now an integral part of the game. To many, this has made the game more exciting and to others, it simply brings more variation to the offense than the smash-mouth type of game that was espoused by coaches and players alike for the first several decades the game was played.

However, it wasn’t an easy time to get the game to where it is today as many who wanted to make passing a bigger part of the game were rebuffed time and time again.  One of those coaches who saw the benefits of a pass-first offense was Hal Mumme, a college football coach whose life was pretty much like any other coach – always working, wondering when the next pink slip would come and trying to convince players and athletic directors that this way would work.

Mumme’s offense, dubbed the “Air Raid”, was given the opportunity to be put into effect at a tiny school in the Midwest, Iowa Wesleyan, that had been a losing program for years. Along with assistant coach Mike Leach (who developed his own air game and is the subject of the excellent first chapter of the book), Mumme turned the program around and not only brought winning football to the campus, but an entire new atmosphere.

It is here where there is some fuzziness in the book, as Gwynne never gives a reason as to why Mumme was asked to leave Iowa Wesleyan, but that doesn’t stop him.  Eventually landing in Kentucky, Mumme does the same thing to a football program at a basketball-first university.  The Air Raid becomes a hit in Lexington, enough so that the Wildcats did the unthinkable at the time – they defeated the Alabama Crimson Tide.

Equal parts biography and history, “The Perfect Pass” is a terrific book that all football fans should read to gain a better understanding of the history of the forward pass in the game and how the innovation of one relatively obscure coach help change the game for good.

I wish to thank Scribner for providing a copy of the book via NetGalley in exchange for an honest review.