Review of "Once There Were Giants"

For boxing fans who long for the days back when the heavyweight champion of boxing was a title that held a lot of esteem and one could see the bouts between these titans on regular TV, then this is the book for you.  Jerry Izenberg has put together a terrific book on the fighters of that era that is one that every fan should add to his or her bookshelf.  Here is my review of "Once There Were Giants." 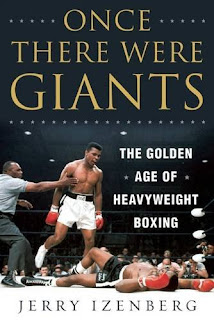 Title/Author:
“Once There Were Giants: The Golden Age of Heavyweight Boxing” by Jerry Izenberg

Review:
Great boxers in the heavyweight division are names that are recognized by even those who are not fans of the sport. Fighters like Muhammad Ali, Mike Tyson, Joe Frazier, and George Foreman are just a few of the heavyweight champions who have left their mark both in boxing and in the world in general.  That era when these and other great heavyweight boxers ruled the sport is chronicled in this terrific book by veteran writer Jerry Izenberg.

There is a passage in the prologue that fits the general theme of the book and also expresses the feelings of not only the author but also many of the readers when Izenberg states that “…there will never again be a heavyweight cycle like the one that began when Sonny Liston stopped Floyd Patterson – and ended when Mike Tyson bit a slice out of Evander Holyfield’s ear.”  This covers the 35 year period of 1962-1997 and Izenberg tells many great stories about many great fighters from that era.

There is Sonny Liston, whom Izenberg states was the last fighter to be controlled by the Mob, a great account of all three classic fights between Muhammad Ali and Joe Frazier.  Noteworthy is that Izenberg believes their third bout, the “Thrilla in Manila”, “…was the greatest fight I ever saw.  Hell, I think it was the greatest fight anyone saw.”  Many who have seen it will echo that sentiment. Then even more great storytelling is in store for the reader as Izenberg tells about both Spinks brothers who held the crown, Leon and Michael and of course, Mike Tyson and all of the chaos surrounding him.

This book is a breeze to read, especially for fight fans who remember the days when the heavyweight championship was a title that was held in reverence and was held by one man, not by several because of various organizations who claim to be the “one” who can declare the champ. The stories about these fighters, and some of the epic bouts they fought to either gain, lose or defend their championship are ones that boxing fans will treasure for a long time.

I wish to thank Skyhorse Publishing for providing a copy of the book via NetGalley in exchange for an honest review.