After a 10 day cruise in which I was able to spend a lot of time on the ship reading books, there will be many upcoming reviews.  The first book completed was about a team of young women from a small Oklahoma school who provided some much-needed inspiration during the Great Depression.  Here is my review of "Dust Bowl Girls" 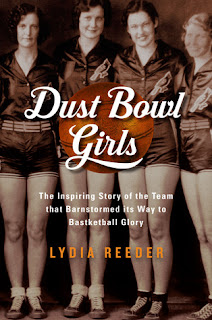 Title/Author:
“Dust Bowl Girls: The Inspiring Story of the Team that Barnstormed Its Way to Basketball Glory” by Lydia Reeder

Review:
During the Great Depression, many in the nation wanted anything that would give them hope and lift their spirts during that trying time. One of the more unlikely sources of that type of inspiration was a women’s basketball at the tiny school of Oklahoma Presbyterian College. The dreams of their coach, Sam Babb, and their story is captured in this well-written book by Lydia Reeder, the great niece of Coach Babb.

In the book, the reader will learn about the Cardinals’ star player Doll Harris and her teammates as they took their athletic gifts and despite the concerns from the Women's Division (led by the wife of President Herbert Hoover) about the health of female athletes, they practiced, won games and then won the 1932 AAU championship (there was no NCAA basketball tourney for men or women at that time).

There are also passages that describe the Depression-era economy of the time, some history of the area and the college as well as the many references to the scorn of women participating in non-feminine sports.  At that time, it was acceptable for women to play sports that would not necessarily make them masculine, such as figure skating and tennis.  But basketball was certainly one game that was supposed to be for the men.

One should also keep in mind that at this time the women’s game was a six-on-six sport in which three players for each team were on offense and defense and cannot cross the center court line.  These sections that explain this attitude toward female athletes make this book one that anyone interested in women’s sports a must read.  It is also recommended for readers who want an inspiring story about a team of determined young women out to show what they can accomplish.

I wish to thank Algonquin Books for providing a copy of the book via NetGalley in exchange for an honest review.