Reading this book was a lesson - not only about this team about which I had previously known nothing, but also a little bit about the times during which this winning streak took place.  Here is my review of "26 In a Row." 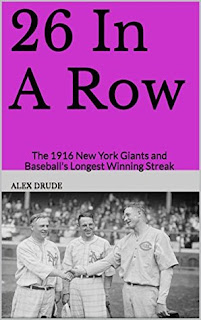 Title/Author:
“26 In a Row: The 1916 New York Giants and Baseball’s Longest Winning Streak” by Alex Drude


Winning streaks are memorable and many people can recite the famous ones.  However, the longest winning streak in Major League Baseball history is one that many do not know about.  There are several reasons for this, but the biggest one is that the 1916 New York Giants were composed of mostly unknown and unaccomplished players.  Their story is captured in this book by Alex Drude.


Like many fans, Drude states that he was fascinated with winning streaks and he set out to tell the story of this team in the introduction to this book.  He then does so by introducing the position players who were the starters for each game during this streak.  Seven of the nine positions had the same man in each game, with the only changes occurring for pitchers and catchers.  Their stories are varied and interesting and the reader will gain a good understanding of each one, including both catchers and the pitchers in the starting rotation.


The book then reads like a diary as it tells the happenings of each calendar day during the streak.  These are not only about the Giants and the recaps of their win (or wins if there was a doubleheader) that day, but also about the major events of the day, such as what was going on in Europe as the Great War was going on.

An interesting book on the longest winning streak in baseball history, this is one that all baseball fans, especially Giants fans, will enjoy to learn more about this fascinating team and its unmatched success.