Review of "New Kids in the World Cup"

Every current fan of MLS and the US Men's National team owes a debt of gratitude to the 1990 US team.  Without their stunning qualification for that year's World Cup, the current state of US soccer would not be possible.  This book is a great ride with that team through qualification and the tourney.  Here is my review of "New Kids in the World Cup". 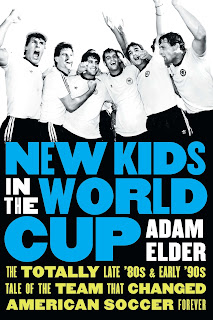 Title/Author: “New Kids in the World Cup: The Totally Late '80s and Early '90s Tale of the Team That Changed American Soccer Forever” by Adam Elder

Review: When the United States men’s soccer team qualified for the 1990 World Cup, that was the first time in 40 years that they played in the tournament.  It was such a surprise that most people associated with the tourney and soccer felt that the United States would embarrass themselves and made many wonder why they were selected to host the next tourney in 1994.  The road that team took to Italia ’90 is described in this fun book by Adam Elder.

Those readers who were not following US men’s soccer (and that would be many) at the time may be amazed to learn how different the funding, salaries and everything else that goes along with it was at that time.  There was no Major League Soccer – or any professional league in the United States since the demise of the North American Soccer League in 1985.  The team was concerned that they would not be able to continue playing the game they love. At the time, there was serious concern there would not be a US soccer team.  In 1986, after failing to qualify for that year’s World Cup, the US team played only two official matches.  It was a dark period and Elder’s writing about that time helps set up the rest of the book, which was terrific.

When the US team defeated Trinidad and Tobago to qualify for the 1990 World Cup, it was the culmination of an adventure of a group of men who were unknown to most, including soccer fans and media in their own country, but coach Bob Gansler knew the talent and determination of guys like Tab Ramos, Bruce Murray, Tony Meola (who supplanted David Vanole as goalkeeper) and Michael Windicshmann.  Elder’s writing about these players included using their nicknames like “Windy” (Windischmann) and “Juice” (Murray) makes the reader feel like he or she knows them on a personal level.  The stories about their games and travels, especially those in Central America when the pressure was at its greatest, was mesmerizing and have many “can’t put it down” moments.

The story didn’t end with the qualification into the tournament, although it felt like that should have been the climax of the book.  The writing about the three games played by the US in group play was just as good, even though they lost all three games. It was the same play-by-play account that Elder wrote for the qualifying games and he included quotes from the television announcers. This makes it apparent that part of the research was watching the games as well as interviews and the usual research methods.  When one considers how different media was in the late 1980’s and early 1990’s, this shows the author’s dedication.

The writing style isn’t all that typical and does read as more suited for readers of a certain age, but it’s just so darn fun to read. From naming each chapter for a popular song from that era to the liberal use of the player’s nicknames, Elder has written a book that any American reader who enjoys today’s version of soccer in the United States should read.  If it was not for this scrappy bunch of players, there would not be the current high salaries for the US men’s team, there would not be the wall-to-wall media coverage and there wouldn’t even be Major League Soccer without this 1990 team.