While I cannot consider myself a fan of the Hartford Whalers, I do consider their logo to be the best one ever created in North American team sports.  Because many others have this same opinion, I wanted to pick up this book to see if I could learn more about why this team is still so popular.  It didn't quite help there, but it was a great source of information on the team.  Here is my review of "Bleeding Green". 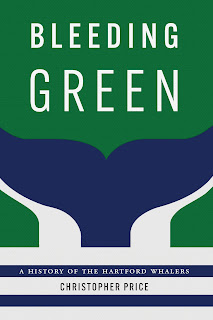 Title/Author: “Bleeding Green” A History of the Hartford Whalers” by Christopher Price

Review: Even though the team has not been in existence for 25 years, the Hartford Whalers still bring back great memories for hockey fans. This may sound puzzling since the team only won one playoff series during their 18-year history in the National Hockey League (NHL). Their unique logo – a whale tail placed strategically above a “W” in green, blue and white – makes Whalers vintage hockey merchandise the best selling items for any seller in that market.  The history of the team, including their time as the New England Whalers in the World Hockey Association (WHA) is the topic of this book by Christopher Price.

Readers who are looking for a detailed expose on why the Whalers are so fondly remembered and why their merchandise sells so well won’t find it in this book.  While Price does touch on that topic in the final chapter, the bulk of the book is a detailed history of the team both on and off the ice.  This is the case for not only their NHL years, in which the Whalers became and still remain the only professional sports team base in Connecticut, but also their mostly successful years in the WHA.

No matter which era is covered, Price does a very good job of informing the reader of their on-ice success (or lack thereof), the moves made by the front office and the business side of the team’s operations as well.  All three of these areas are covered in excellent detail.  This is especially true of the latter because those stories were the most colorful.  Part of this was due to the financial instability of the WHA – the Whalers were considered to be the most stable of the franchises in this league, but even they had issues, mainly due to needing to share the Boston Garden with the NHL’s Bruins.

There are many interesting aspects in the team’s history that seems to tug at the heart of Whalers fans.  These include the trades of popular players like Ron Francis and Mike Luit, the team’s goal song “Brass Bonanza” and even how the community pulled together when the roof of the Hartford Civic Center collapsed and the team temporarily played its home games in Springfield, Massachusetts.

Those are just a few of the many aspects of the very interesting history of a hockey team that may not have enjoyed much success in the NHL (it should be noted that the Whalers won the first WHA championship in 1973 and faced the Winnipeg Jets in the finals in 1978) but certainly has won a place in the hearts of many hockey fans, especially those in Connecticut. This book is a very good source of information for the Whalers and is recommended for anyone who still has attachments, for whatever reason, to the team.