As I always am intrigued by books on sports with which I am unfamiliar, this one on sled hockey, a game I only knew about from ads about the Paralympics, was one that I enjoyed and learned a lot about the game as well as this team that pulled off an upset about as big as the 1980 Olympic hockey team.  Here is my review of "Hockey's Hidden Gods" 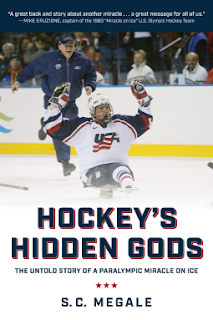 Title/Author: “Hockey’s Hidden Gods: The Untold Story of a Paralympic Miracle on Ice” by S.C. Megale

Review: When one hears about a “Miracle on Ice” done by a hockey team from the United States, one immediately thinks of the 1980 Winter Olympic team that defeated the Soviet Union on the way to the gold medal.  However, there is another Olympic feat performed by a United States hockey team that could be considered a miracle in its own right.  That miracle, winning a gold medal in sled hockey in the 2002 Paralympic Games, is covered in this very good book by S.C. Megale

In 1998, sled hockey was introduced to the Paralympics and the United States had no team, no sled hockey program and no funding.  Thanks to some dedicated coaches and players, they started putting together the foundation of a team that would compete in 2002 – only because as the host nation of the games, the United States was granted an automatic berth into the tournament.

In only three years, from the formation of the United States Sled Hockey Association in 1999 to the start of the 2002 Paralympic Games, a lot of work was done in recruiting coaches and players plus getting the necessary funding and backing from USA Hockey. The coach of the team was a name familiar to hockey fans of a certain age – Rick Middleton who had a good NHL career with the Boston Bruins.  The star players of the sled hockey team, such as Sylvester Flis and Patrick Byrne, were certainly not as well-known but their contributions were just as important.

The book is roughly divided in half between player profiles and descriptions of the preparation and then the actual games of the 2002 Paralympics.  Just like the 1980 team, the 2002 had to defeat a very good team from a Scandinavian country as Norway was considered to have the best sled hockey team and that was the game that gave the United States the gold medal.  Megale’s writing on both the games and players is very good in easy-to-understand language for fans and non-fans alike.

It should also be noted that from the start, Megale did not write this book to have be inspirational to see what disabled athletes can accomplish or to have it be interpreted as a “feel-good” tale.  He lists three priorities for the topic of the book – hockey, history, heart.  He did a very good job of meeting this goal as the takeaway from this book will be that this team accomplished a terrific athletic feat against excellent competition in their chosen sport.

I wish to thank Rowman and Littlefield Publishing for providing a copy of the book in exchange for an honest review.