Review of “When Nothing Else Matters”

One of the few books about Micheal Jordan that is more criticism than praise, this book chronicles the two seasons in which Jordan was a player and front office executive of the Washington Wizards. Still a good read. Here is my review of “When Nothing Else Matters” 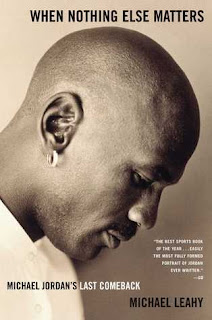 Title/Author:
“When Nothing Else Matters: Michael Jordan’s Last Comeback” by Michael Leahy
Tags:
Basketball , professional, Biography, Wizards
Publish date:
November 1, 2005
Length:
448 pages
Rating:
4 of 5 stars (very good)
Review:
Michael Jordan is one of the greatest basketball players of all time. No one ever disputes that, only if he is THE best ever. While his six championship teams in Chicago will help people make that claim, his last two seasons might harm that argument. Three years after making the clutch shot to give the Bulls that sixth tite, Jordan joined the Washington Wizards in their player development department and soon thereafter also decided to make a comeback as a player. Those two seasons in Washington are the subject of this book by Washington writer Michael Leahy.
From the first time he performed his work in either role, it was clear that Jordan was going to face his biggest challenges in basketball. From his decision to make Kwame Brown the first high school player selected with the first draft pick to hiring Doug Collins as the Wizards’ head coach to his nagging knee issues that caused him to miss significant time as a player, Leahy writes about these two seasons with Jordan as only a person with inside access could.
Leahy doesn’t paint a very nice picture of Jordan, as Jordan comes across as a) stubborn and unwilling to accept the end of his basketball playing days are near, b) a bully to his teammates, especially younger ones like Brown and Richard Hamilton and c) in over his head with his front office duties and frequently at odd with owner Abe Pollin.  None of this is really incorrect, and Jordan was certainly not the only aging athlete who is denying the loss of ability while aging, but Leahy’s style is very critical of Jordan throughout the book.
While Leahy does back up much of his criticism of Jordan, he also takes to criticizing those who,hold Jordan in high regards, frequently stating that these people feel he is a deity. One such person who he claims has that belief is a colleague of Leahy at the time, Michael Wilbon. It was at this point I felt the negativity went too far, as this part was all about Leahy and not Jordan.
Despite this overall negative tone, I felt this was a solid book describing those two seasons as neither Jordan nor the Wizards enjoy much success. The way Jordan was unceremoniously relieved of all his duties with the Wizards just felt like the appropriate ending. While not a balanced picture of Jordan, it is nonetheless an engaging and fast paced read that most basketball fans will enjoy. Those who have that belief that he was the greatest of all time, however, might want to skip this.
Book Format Read:
Paperback
Buying Links:
https://www.amazon.com/When-Nothing-Else-Matters-Comeback-ebook/dp/B000FC2NX0/ref=tmm_kin_swatch_0?_encoding=UTF8&qid=&sr=
Posted by Lance Smith at 6:27 PM