Review of "Icing on the Plains"

While the New Jersey Devils are one of the more stable franchises in the NHL now, they haven't always been that way.  Their first two years as the Kansas City Scouts produced some interesting tales, some bad hockey, but also some great memories. This is my review of a book about those two seasons of the Scouts, "Icing on the Plains." 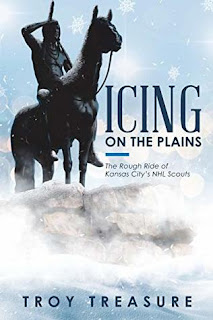 Title/Author:
“Icing on the Plains: The Rough Ride of Kansas City’s NHL Scouts” by Troy Treasure

Review:
Continuing its expansion into new cities and territories, in 1974 the NHL expanded by two teams placing them in Washington, DC and Kansas City. While the Capitals have enjoyed success in Washington, including a Stanley Cup championship in 2018, the same couldn’t be said for their expansion brethren.  The Kansas City Scouts lasted just two seasons in that city before being sold to a group in Denver who moved them there.  The two seasons in Kansas City are the subject of this well-researched, fast-reading book by Troy Treasure.

Treasure starts out by giving the reader a rundown of the history of professional sports in Kansas City up to the point where the NHL awards a franchise to a group of investors known as Kansas City Hockey Associates.  Right from the start, the franchise was plagued with problems – their original choice for a team name, the Mo-Hawks, was rejected as it was believed to be too close to the same as the Chicago Blackhawks. Arena issues almost kept the franchise from being awarded until the Kemper Arena was approved for construction. Their cash flow, tenuous at the start, would continue to be an issue as the team suffered from poor performance on both the ice and the turnstiles.

There are many colorful stories about important people in the two years of the Scouts. The reader will get to learn more about people like the first coach and general manager of the Scouts, Bep Guidolin and Sid Abel respectively.  Many Scouts players are profiled throughout the book, including some colorful characters such as Steve Durbano and the most successful player drafted by the team, Wilf Paiment. The story of his parents arriving at games in what could best be described as colorful clothing is one of the better stories involving players.

Something present in this book that is not common in many books about specific teams is player profiles are written for players on other teams. While many of these are interesting and fans of other teams may enjoy them, these interrupted the flow of the reading about the Scouts.  The bulk of the material written were recaps, stories and issued affecting the Scouts and even just through these, fans who followed hockey during this time, whether they were fans of the Scouts or not, will enjoy reliving some memories.

However, those memories were not great for the Scouts as they suffered through what many expansion teams went through in their early years at the time when there were very few quality players available through the expansion draft.  The Scouts did set a dubious record near the end of their second season by playing 25 consecutive games without a victory, a record that has since been broken. But that inglorious achievement is a proper reflection of the struggles of the team that was mercifully allowed to move to Denver. While the franchise had much of the same struggles in Colorado as the Rockies and in their early years after relocating yet again in New Jersey, those bad times didn’t last forever as the New Jersey Devils, winning three Stanley Cups in a nine year period in the mid to late 90’s and early 2000s.

While it was nice to finally see the franchise enjoy some success in New Jersey, this book was also a nice tribute to the rough but colorful beginning of the franchise that hockey fans of this time period will be sure to enjoy.

I wish to thank Mr. Treasure for providing a copy of the book in exchange for an honest review.
Book Format Read:
Paperback