Having read some of Bernard Fernandez's writing on boxing previously, I was very interested in this collection of his best columns.  While compilations like this usually are good but have a few duds in the mix, this one didn't - every single article was one in which I either learned something new, was very entertained or both.  Here is my review of "Championship Rounds." 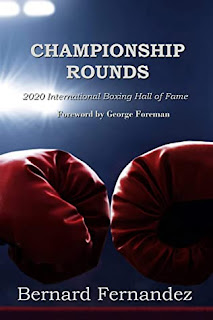 Review:
The sport of boxing has had a very colorful history and depending on what one reads or who he speaks with, the sport is either dying or has never been better.  One writer who has seen it all in a 35 year career writing about the sweet science, Bernard Fernandez, has published a compilation of his more memorial columns and articles in his career.

His writing is especially worthy of this type of consideration as Fernandez is one of the latest inductees into the International Boxing Hall of Fame as a writer. This book covers just about anything one can consider about the sport. If a reader wants to read about legendary fighters, there are articles on Muhammad Ali, Archie Moore and George Foreman, for starters.  If it is managers or promoters, there’s an excellent article on Lou Duva for his obituary by Fernandez.  Of course, one can’t avoid Don King when talking about promoters and his story on “His Hairness” is one of the better selections in this collection.

Fernandez doesn’t just write about the well-known boxing figures, he also writes about some more obscure ones as well.  One great example of this is Craig Bodzianowski.  While he may not be a household name, a reader will become a fan after reading about his success as a one-legged fighter, as he fought with a prosthesis after losing one leg in an accident.  Fallen heroes such as Tony Ayala, Jr are also featured with stories about more than just their actions inside the ring.  Even a superfan is covered as Fernandez also writes a moving obituary on Jack Obermayer, who attended (by an unofficial count) “3514 fight cards in 400-plus cities spread across 49 states.  Somehow, he never made it to Alaska.”

Fernandez also wrote several selections on women’s boxing. While he was one of hundreds who wrote about the fight between Laila Ali and Jacqui Frazier-Lyde (daughters of Muhammad Ali and Joe Frazier respectively), Fernandez also introduces the reader to several outstanding female boxers who should be recognized for their contributions to the sport. These include Jackie Tonawanda (a women’s boxing pioneer often dubbed “The Female Ali”), Claressa Shields (first American woman to win a boxing Olympic gold medal) and Rochelle Gilkin.

This is just a small sample of the material in this short book that fight fans will want to read in one sitting as this reviewer did.  No matter what level of interest or what era of boxing a reader wants to read about, the person is sure to find something of interest in this book. Every selection in this book is one that is well written, entertaining and educational for even the most knowledgeable of boxing readers.
Book Format Read:
E-book (Kindle)