It was interesting to read about athletes not named Jesse Owens who had to endure the same treatment at the 1936 Olympics.  Here is my review of "Olympic Pride, American Prejudice." 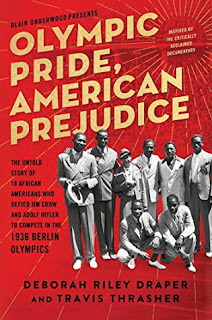 Review:
Most people know about the story of Jesse Owens and his winning four gold medals at the 1936 Summer Olympics held in Berlin during the height of the Nazi party's hold over Germany.  However, Owens was not the only African-American athlete who won medals or competed in those Olympics. The stories of what was accomplished by the other 18 African American athletes are told in this very good book by Deborah Riley Draper and Travis Thrasher.

While there isn't extensive information available on every one of these athletes, some of the stories tell of an incredible tale of perseverance and competition. The three athletes whose stories are shared in the most detail – Louise Stokes, Tidye Pickett and Ralph Metcalfe – take different paths but all of them, along with the others, share a common theme.  They not only had to wonder what would become of them in Berlin, but also had to fight off prejudice in their home country as well.  A good example of this is the writing about how one of the most prolific white female athletes of the era, Babe Didrikson.  She did not care for Stokes, Pickett or any of the other African American athletes, and one of them, Jean Shiley, shares this observation in the book.

The most incredible of these stories belongs to Stokes and Pickett who had qualified to run in the 1932 Games, held in Los Angeles.  Due to a last minute "technicality", they were not allowed to compete in the Games, instead having to watch white teammates compete.  Metcalfe won a gold medal in the 1936 Games in the 4x100 relay (along with Owens), but he too got this spot by a questionable decision – two American Jewish runners were told the day before the race that they would not compete and Metcalfe was one of the replacement runners.  Both of this are examples of the prejudicial practices these athletes encounter in American and the authors present these in a manner that is easy to read as well as informative.

All of the other African-American athletes are chronicled as well, but not quite as much as the three mentioned above.  Nonetheless, that doesn't diminish their accomplishments and the authors give them as much credit for this if not as much text in the book. This book is one that is well worth the time to read and learn about the hardships and accomplishments of these athletes who are often overlooked in the annals of Olympics history.

I wish to thank Atria Books for providing a copy of the book via NetGalley in exchange for an honest review.
Book Format Read:
E-book (Kindle)