It is hard to believe that after nearly seven years of writing reviews, I never had reviewed a book on Nordic skiing before getting this upcoming memoir of a young woman who has won an Olympic medal in the sport.  The book covers much more than just the sport, however and was a very good read.  Here is my review of "Brave Enough." 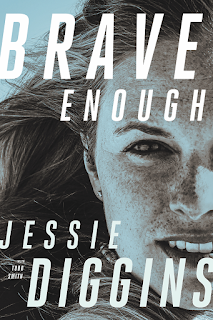 Review:
The progress made by women in many sports has been amazing in the past twenty years and one of those sports in which women, particularly American women, have made great strides is Nordic, or cross-country, skiing.  An Olympic medal winner for the United States, Jessie Diggins, writes her memoir in a light, breezy manner that is not only easy to read, it is one that shows the reader every side of this young woman.

As is typical with any sports memoir, Diggins shares her stories of growing up with her family but with a little more detail than usual.  Growing up in Minnesota, it was fitting that she became active in the winter with her sister and parents and from there, she became involved in skiing early and has kept up a demanding training schedule from seventh grade in the early 2000's to today.

The reader will learn much about the sport of Nordic skiing, particularly the history of the sport for women, where they have made tremendous progress with not only their performances, but also their exposure and publicity.  Diggins talks about her training and her accomplishments in a manner that shows she is still a young woman at heart.  That is one of the more endearing aspects of the book – she writes in the manner that she would talk to someone about her skiing career and her life.

Her life was not all glamor, however, as she spends a good amount of text talking about her dark secret – her struggles to overcome bulimia.  Anyone not familiar with what that disease can do to a person, including noting that it is not just skinny young girls who become afflicted with this disease, will learn a great deal from Diggins' candid account of her struggle and recovery from this eating disorder. She has a great deal of praise for the Emily Program, which was the program that assisted her with recovery.

Diggins shares several amusing and entertaining stories as well as the "dark side" of her disease. One good example is her actions when she and the rest of the American Olympic team was welcomed at the White House in 2014 upon their return from the Sochi Winter Olympics.  She was so overcome with emotion when President Obama shook her hand that she not only cried, but also blurted out she wanted to hug him, something no other athlete had done that day.  Not only did the President hug her, but so did First Lady Michelle Obama immediately afterward, and said a few comforting words to Diggins.  Jessie's account of this moment is just one of many light-hearted and funny tales she tells as well as the seriousness of her sport and her disease.

This book is an entertaining and informative read that anyone who is interested in Nordic skiing, the life of an Olympic athlete or wishes to learn more about eating disorders is encouraged to read.  Jessie was certainly "brave enough" to not only tackle her disorder, but also to become an Olympic medalist.

I wish to thank University of Minnesota Press for providing a copy of the book via NetGalley in exchange for an honest review.
Book Format Read:
E-book (Kindle)

Buying Links:
https://www.amazon.com/Brave-Enough-Jessie-Diggins-ebook/dp/B084TFFHK1/ref=tmm_kin_swatch_0?_encoding=UTF8&qid=&sr=
Posted by Lance Smith at 10:47 AM