It's hard to fathom that Canada has not had a team win the championship in its national sport in over 25 years.  The last Canadian team that did, the 1993 Montreal Canadiens, was not the typical Montreal Cup winner and this book tells the tale of many of their lesser-known players.  Here is my review of  "The 1993 Canadiens". 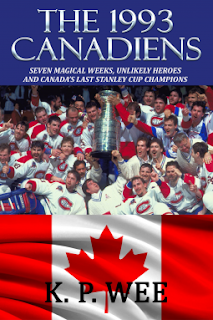 Review:
The last time a Canadian team won the Stanley Cup, the prized trophy that is awarded to the champions in Canada's national sport, was 27 years ago when the Montreal Canadiens surprised the hockey world and took home the Cup.  Stories about that team and some of its players are told in this book by author K.P. Wee.

What sets this book apart from other books focused on one season for a team is that this one talks more about some of the unsung players on that Canadiens team instead of the stars like goaltender Patrick Roy and captain Guy Charboneau.  Instead the book shares some excellent stories about lesser-known players on that team such as Gary Leeman, Gilbert Dionne and Stephan Lebeau.  Each of them had a key play, goal or other performance that helped Montreal continue on its unexpected path to the championship that year.

Each one of them has a different story in which they had some difficulty in their NHL careers but were able to overcome the adversity to come up big for the team. The most interesting story to me was about Dionne.  Playing in the shadow of his older brother Marcel, who had a Hall of Fame career playing mostly with the Los Angeles Kings, Gilbert scored a winning goal in the second round in overtime against the Buffalo Sabres and also a goal in the third game in the Finals against the Kings.  Leeman had both of these players as linemates and scored a key goal in the opening round against the Quebec Nordiques. It was a great moment for the player who once scored 50 goals in a season for the Toronto Maple Leafs.

Information like this on these players makes the book very informative. The writing in the book, however, is very repetitive as the same stories about these three players as well as others are repeated throughout the book.  Also, there are some other points that are repeated later in chapters or after the event happened that didn't need to be said again.  As an example, in the conference finals series against the New York Islanders, two Islander players had chances to win the game on a breakaway in overtime in games two and three.  That the Islanders failed to capitalize on those opportunities and Montreal later did were important moments in the Canadiens' march to the Cup.

However, in the chapter about the conference finals, it was asked multiple time how would the series (a sweep by Montreal) would have been different had the Islanders scored on those plays?  That is a rhetorical question that really didn't need to be asked multiple times.  Other events during the playoff run, such as the famous illegal stick penalty called on the Kings' Marty McSorely during game 2 of the finals, are also repeated often, something that hampers the flow of reading the book.  Which is a shame, because otherwise, this was fun to read about that Canadiens team which may not have been the most talented Montreal squad to win the Cup, but certainly knew how to get the most from every player. Overall, a decent book on Canada's last Cup winner. Three and a half star rating, rounded to four for NetGalley, Goodreads and Amazon.

I wish to thank Riverdale Avenue Books for providing a copy of the book via NetGalley in exchange for an honest review.
Book Format Read:
E-book (Kindle)