Review of "Two Sides of Glory"

The baseball postseason of 1986 is considered to be one of the best of all time, with both league championship series and the World Series having epic games and all three with unforgettable moments.  While the New York Mets may have won the World Series, their opponents in that epic seven game series, the Boston Red Sox, are considered a great team in their own right and Erik Sherman writes their stories in this terrific book.  Here is my review of "Two Sides of Glory" 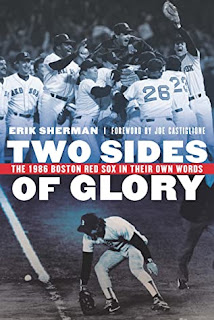 “Two Sides of Glory: The 1986 Boston Red Sox in Their Own Words” by Erik Sherman

It isn’t often that the losing team in the World Series is fondly remembered for decades. Even though the Boston Red Sox have won four World Series titles since then, their 1986 team is considered to be one of their best despite losing to the New York Mets in an epic seven game World Series.  Author Erik Sherman, who published a book on that Mets team in 2016, now turns his attention to their vanquished foes, the Red Sox.  His interviews with thirteen of that team’s players reveals how much that season means to them all these years later.

Each chapter covers an interview with the players, starting with Bill Buckner.  After his error in the tenth inning of Game Six allowed the winning run to score for New York, keeping the series alive for a Game Seven that the Mets eventually won, Buckner was subjected to criticism, ridicule and even death threats to him and his family.  His interview was moving, at times heartening and at times melancholy as well. It was clear that the reaction he got to that fateful moment has bothered him for many years. The statement he made to Sherman about being “forgiven” by fans after the Red Sox won the World Series in 2004 was telling as Buckner said that made him angry – realizing that was what some people now thought.

As good as that interview was, each one thereafter was just as good and revealed much about each man as Sherman asked excellent questions that could not be answered with the same statements and clichés that you hear in postgame or press conference interviews.  Usually when an author puts himself in the book when it is not a memoir, I find it self-serving, but that is not the case here as Sherman’s questions needed to be stated and his banter with the subject enhanced the stories they told.

Those stories were quite revealing, no matter who was doing the talking and many of them would run against the personality one would immediately think of when mentioning that player’s name.  The two players who exhibited this trait the most were Roger Clemens and Jim Rice.  Both of them had reputations for angry personalities, but both of them were as nice as possible to not only Sherman, but to their Red Sox teammates as well, which was bore out in the interviews with others.  Clemens talks about the allegations of his use of performance enhancing drugs, Rice about his relationship with the media.  Other player interviews revealed other touching stories, such as Dwight Evans losing two sons to brain cancer, Marty Barrett getting choked up when speaking about his former teammates and nearly everyone who had something to share about two teammates who passed away before Sherman began the interviews, Don Baylor and Dave Henderson.  It should also be noted that after being interviewed for the book, two additional 1986 Red Sox players passed – Buckner and Tom Seaver.

One other quality that makes this book a page-turner is that the players are genuine with Sherman.  None of them seem to be phony or trying to sound like someone they aren’t, even if that didn’t match their persona when playing.  This has already been mentioned for Rice and Clemens, but the one interview that struck me as the best one in the entire collection - and they were all excellent - was the one with Dennis “Oil Can” Boyd.  He not only shares his thoughts on the 1986 team and World Series (he is still upset that he was passed over to start Game Seven and instead Bruce Hurst was given the ball), but he also tells of his reverence for the Negro Leagues, why he believes that Jackie Robinson may not have been the best thing to happen to Black ballplayers and his thoughts on why the number of Black players has dropped so much in recent years.  Through all those, he still had the outspoken and larger-than-life personality that he had while pitching for the 1986 Red Sox.

Whether or not a reader is a Red Sox fan, a Mets fan, or a neutral observer for that epic showdown, this book is one that every reader who has any interest in the sport should read.  Sherman became a best-selling author with his book on the 1986 Mets and this one should become another one.