Review of "The Q Factor"

Thanks to a couple of reading challenges and also with my sports attention on football with the start of the NFL playoffs, I picked up this book that had been sitting in my TBR since its publication in September.  It was worth the wait, especially with three of the quarterbacks playing a prominent role in the book playing for their teams in the playoffs this weekend.  Here is my review of "The Q Factor" 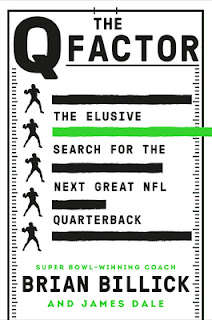 “The Q Factor: The Elusive Search for the Next Great NFL Quarterback” by Brian Billick and James Dale

The position of quarterback has always been the most important in professional football, but has become even more so in today’s game with the increase of scoring and with a quarterback’s mobility becoming more important in evaluation.  Former NFL head coach Brian Billick, considered to be one of the more knowledgeable coaches for offense, provides an in-depth look at how college quarterbacks have been evaluated and offers his take on what works, what doesn’t and what should be measured or considered when a team wants to draft a quarterback.

The book stars by focusing on the 2018 draft in which five quarterbacks were selected in the first round: Baker Mayfield by the Cleveland Browns, San Darnold by the New York Jets, Josh Allen by the Buffalo Bills, Josh Rosen by the Arizona Cardinals and Lamar Jackson by the Baltimore Ravens.  Billick offers both the good and the bad in his description of reports from teams on each one of these quarterbacks and follows them throughout the book through the 2019 season.  As is the case with any other group of young quarterbacks taken in a single year, there were those who became stars (Jackson), those who are believed to not be quite there but are improving with some warning signs (Allen, Mayfield), those for whom there are still many question marks after two years (Darnold) and some who just were not good enough to hold a job (Rosen).  It should be noted that any and all of these statuses may change soon as this was determined before the 2020 season commenced in which both Allen and Mayfield took steps forward.

This start was a tough read unless one is a football junkie with advanced knowledge of how to read scouting reports, playbooks and other such material.  However, once one gets past this chapter, the book is filled with terrific observations that go just beyond what a scout will observe or loads of advanced statistics that read alone will not only seem complicated, but will not give a true picture of how a quarterback will perform.

Billick’s belief that data alone, especially one particular statistic such as pass completion rate, will not sufficiently determine the ultimate success or failure of a quarterback is a key part of his observation and is one that he repeats frequently in the book.  Another frequently mentioned word is “extrapolation.” Observing a young college quarterback for just one or two seasons, no matter what a scout or coach is looking at, cannot accurately predict how he will do in that area over a long period of time without proper extrapolation.

When Billick talks about extrapolation and his wish that it could be used, as well as more quantifiable data on characteristics a good quarterback needs such as leadership, intelligence (his opinion on the current use of the Wonderlic test is quite pointed to say the least) and the ability to make quick decisions, it makes for great reading as he explains in detail why these traits are important. He does so in a careful manner so that more casual fans of the game will be able to understand the concept, but yet he also states this in a way that football nerds will enjoy as well. Billick’s experience as a long-time football coach and analyst comes through in this and other passage when he explains why he believes that there is more needed in order to fully analyze a quarterback properly.

Even with all this, another key point he makes is that in the end, this is still basically an endeavor that has a 50/50 split in determining which ones will pan out as expected and which ones will become a bust. A good example of this is the classic comparison of Ryan Leaf and Peyton Manning in the 1998 NFL draft.  However, what Billick did instead of that one was to take the scouting consensus on Leaf, who was considered a can’t-miss project, and compare him to a different college quarterback who didn’t measure up to Leaf in every single category and was taken in a later round. That quarterback – Drew Brees. That is a fresh take on a common topic that many football fans hear about regularly and it is also a reason, among others, why this book comes recommended for any fan of NFL football.

I wish to thank Twelve Books for providing a copy of the book via NetGalley in exchange for an honest review.