Happy New Year to everyone and thank you for visiting my blog.  Starting off another year of reviewing some great books with one on longtime basketball coach Richie Abudato.  While he may not be a household name or have his name engraved on the Larry O'Brien trophy, he certain has some great stories to tell from his lengthy coaching career.  Here is my review of "Havin' a Ball." 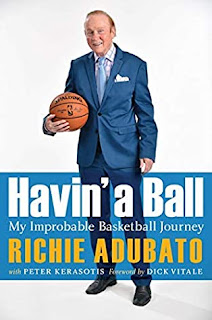 “Havin’ a Ball: My Improbable Basketball Journey” by Richie Adubato with Peter Kerasotis

Richie Adubato is what one could call a basketball lifer. Between playing, coaching and broadcasting, he has been involved in the game in some manner for over six decades and shows no sign of stopping.  Currently doing color commentary for the Orlando Magic, Adubato had a very interesting career as a coach. He didn’t have the success of a Hall of Fame coach like Pat Riley or Phil Jackson, but he did become a well-known and beloved figure in professional basketball.  As a result, he has plenty of stories to share as he does in this very entertaining memoir.

A self-proclaimed “Jersey Boy”, Adubato began his coaching career in the junior and senior high schools of New Jersey, primarily in the Paterson area. He gained not only a good coaching reputation but also was known for his toughness both on and off the court, mainly due to the neighborhoods of the schools in which he worked.  He also coached at Division III Upsala College when he got his first break into professional basketball.  It came when a fellow Jersey Boy, Dick Vitale, called Adubato to be one of his assistant coaches of the Detroit Pistons.

From there, Adubato got the itch to stay in the professional game and he turned it into a lengthy career.  When Vitale was fired in the middle of his second season, Adubato became the interim head coach.  After the Pistons gig, Adubato made several stops as both an assistant and as a head coach for the Dallas Mavericks and the Orlando Magic.  He had success at both places, guiding the franchises to playoff appearances but also had down seasons that led to his dismissal at both places as well – such is the life of a NBA coach.  However, he didn’t let that stop him as he became the head coach of the New York Liberty in the early years of the WNBA, leading that team to at least the Eastern Conference finals in four consecutive seasons.  He also coached in Russia (one of the most entertaining stories in the book took place there) and came back to the WNBA, coaching the Washington Mystics in his last coaching job before going into broadcasting.

With all of this experience and travel, one would expect the book to contain plenty of stories and name-dropping.  It certainly delivers on that promise as Abudato shares so many stories of not only his coaching career, but also a few stories about meeting other celebrities such as Frank Sinatra.  There isn’t a lot of personal information in the book as he doesn’t talk about his family very much.  The most amount of text used for a personal or family story was when he married his second wife Carol and they were able to brag that they got married in Italy – Italy, Texas that is.

The book doesn’t have a really good flow, although Abudato tells his stories in chronological order, which is helpful.  The writing is pretty good and is clearly in conversational style as he sometimes just goes immediately from discussing one coaching job ending to another starting and a reader may not remember which season this refers to unless he or she is paying close attention.  But those are minor annoyances because reading this book is just so much fun. The stories will often make you laugh, but a few are more somber, such as the story of one of the players he coached in Dallas, Roy Tarpley.  Those stories and situations are just as easy to read, however, and it shows how much coaching and basketball are in Abudato’s blood.

Any basketball fan who has heard about Abudato, either through his coaching or his broadcasting, will want to read this book. It has the feel of a chat on the porch while sitting on a swinging bench and enjoying one’s favorite beverage while the coach shares another tale from his coaching life.