I was asked if I would be willing to participate in a virtual blog tour for this book written by Caryn Rose.   At first I was skeptical as I had never heard of a virtual blog tour and seeing that this was a romance novel, I wanted to make sure that a sport played a major role in the story.  Well, I am very glad that I overcame that skepticism and am part of the tour because I am very happy to be promoting this wonderful novel.  Caryn's baseball knowledge is evident throughout the book and the baseball is the driving force behind the characters' actions and emotions.   Here is my review of "A Whole New Ballgame." 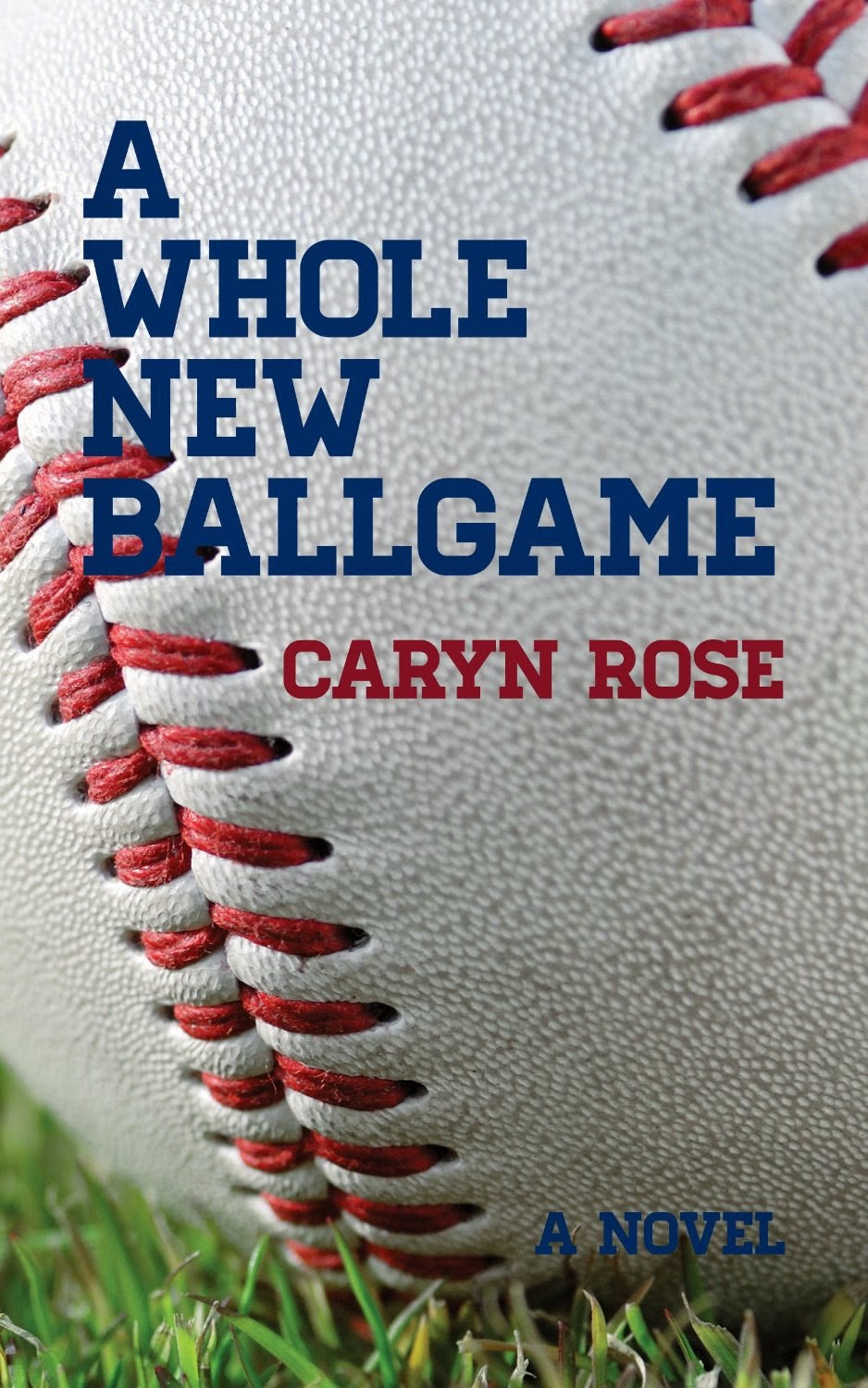 Review:
Many consider a diamond to be a symbol of love.  In Caryn Rose’s novel “A Whole New Ballgame”, that is certainly true.  However, the diamond in question is not an expensive jewel that is set inside a ring, but instead the diamond-shaped playing field at a baseball stadium.

When Laurie gets her heart broken by a musician in a wildly popular rock band, she ends up finding an escape from the heartbreak by going to a Philadelphia Phillies baseball game.  While she never has understood the game, she finds herself immediate being drawn to the entire spectacle – the game itself, the crowd, and the mascots.

She enjoyed the experience so much that she decides to go back the next night and there she meets Eric and Peter, two friends who are on the ultimate road trip for baseball fans.  They are visiting all thirty major league ballparks. Even though Laurie will have to go back home to Boston, the three of them form a friendship and promise to keep in touch.  Back in Boston, Laurie loses her job and is being wooed to come back to an old boyfriend. Figuring it’s time to start a new chapter, Laurie contacts and Eric and Peter and joins them on the rest of their tour.  It becomes about more than just baseball and job hunting for Laurie as she is now realizing a new set of passions in her life.

While this is a romance novel, there is much more than just that, plus the reader doesn’t see those feelings coming out in any character right away. Instead, the reader is whisked away on this baseball journey to various ballparks. Rose shows her baseball knowledge with many accurate descriptions of not only the ballparks but also the teams and their standings in 2006, which is when the story takes place.

Because the characters are fans of the game, the book’s baseball references are those that reflect a fan’s point of view. Some of these moments are goofy, such as the joy Eric and Laurie share when they get pictures taken with the team mascots.  Some of them are quite serious such as when Peter is teaching Laurie the fine art of keeping score.  Some are just good baseball reading.

The Mets (Eric’s favorite team) get a lot of love in the story as their season almost reflects the emotions felt while reading the story – a lot of ups and downs, excitement and heartbreak as well.  As for how the story plays out for Laurie, Eric and Peter – let’s just say that the ending for me was as satisfying as a walk-off home run to win the game in the bottom of the ninth inning.  An outstanding novel that will be a hit with baseball fans as well as romance readers.

I wish to thank Ms. Rose for providing a copy of the book in exchange for an honest review. Were the characters realistic?
Yes, both the main and secondary characters were believable and easy to root for or root against, depending on the reader’s viewpoint.

Pace of the story:
Excellent  - it moves as quickly as Peter, Eric and Laurie do from ballpark to ballpark.

Do I recommend?
This book, at its heart, is a romance book, but a reader doesn’t have to be a fan of romance novels in order to enjoy this novel.  It not only is a story of heartbreak and recovery, but also of rock music and especially baseball.

Sports-Related Interview (text complete).docx
Is it hard to write a novel about baseball for non-baseball fans and consider ways to hold their interest?
Caryn: I think of it more as a love story and a road story that happens to have baseball as a background. It was definitely a challenge, but it was a priority for me to write about baseball in a way that wouldn’t alienate readers, which tied in with the part of the plot that features Laurie learning about baseball.
Was it difficult to remain factually bound to the baseball games you wrote about?
Caryn: Thanks to the many wonderful baseball historians out there that keep historical boxscores, it wasn’t hard to get the information. The only real challenge was timing, like when I needed something to happen during the day instead of at night. That’s why I offer a disclaimer in the introduction, so as not to offend the sensibilities of those who would know the difference.
Baseball fans are all men in the beginning of the novel. Is baseball not a female-friendly sport?
Caryn: 45% of Major League Baseball’s fanbase is female. However, if you didn’t grow up with the sport, and didn’t have anyone in your family who followed it, you might not realize this. You wouldn’t have seen the photographs of the crowds at Ebbets Field, watching the Brooklyn Dodgers, which included men and women. You wouldn’t know about Hilda Chester, the Dodger’s biggest fan, who used to hang up a sign reading “HILDA IS HERE,” brought a cowbell to every game, and would often pass notes regarding strategy to the team’s manager.
I didn’t know any of these things before I came to baseball, either.
After Laurie really sees that Ryan is with another woman, especially after he has invited her to stay with him in Philly, she goes to a baseball game because she knows she won’t be alone there. What is it about baseball that brings strangers together? Laurie is unfamiliar with baseball at the time, so how does she KNOW she won’t be alone?
Caryn: Laurie grew up in Boston, which is a huge sports town. Whether you like it or not, at some point you’re going to end up at Fenway Park for a baseball game. She always wanted to understand more about baseball, but so many people just assume that you know -- because they know, and they’ve never not known, so they can’t imagine someone NOT knowing -- and it just gets worse as you get older. She knew that one of the things she liked about baseball was the feeling of being together with a group of people all watching and cheering for the same thing, and you can hide in a large crowd and have something to occupy your mind. The ballpark is the absolute perfect place to go and gather your thoughts for a little while.
Laurie’s friends tell her, “You get one team. You can switch once, in the case of marriage, a family member joining a team in any capacity, or if the team commits an unpardonable sin. But that’s it...” Why do people only get one team? What does it mean to give up on your team or change teams? What would it mean to other fans?
Caryn: It’s about loyalty, and not being a bandwagon fan, the type who only shows up when things are good, when the team is winning, when the ballpark is suddenly the cool place to be. Real baseball fans stick by their team through thick and thin. A friend of mine moved from the Midwest, where he grew up as a fan of the Cincinnati Reds. He moved to the Pacific Northwest and became a Seattle Mariners fan. If the Reds played the Mariners in the World Series, he would root for the Mariners. It doesn’t mean he doesn’t have any affection for the Reds or that he burned all of his baseball collection, but there can only be one winner.
It seems like baseball fans pop up right when Laurie feels the worst. Have you ever lived in a baseball city? Do fans really take of their ties off, unbutton their business shirts, and put on baseball hats? Is the devotion really like that?
Caryn: Baseball fans are everywhere, and love talking about the game. If you see someone wearing a shirt or a hat, and you ask about their team, or did they see the game last night, or about how a player is doing, you’ll have an automatic connection. This is the kind of thing you’d only know if you were a baseball fan who walked around wearing a hat or a keychain on your purse or a sticker on your car, and so you’ll get indoctrinated into the tribe once you join it. This is why it feels like baseball fans pop up whenever Laurie feels the worst.
If you’re going to the ballgame straight from work, and you’re a fan, you’re probably going to take off your tie to be more comfortable (and also so you don’t ruin it by spilling something on it) and yes, you’d put on a ballcap. If you’re a bunch of executives heading to the game to sit in a fancy suite and kind of watch the game while doing business, then no, you probably wouldn’t take off your tie and put on a hat. But there’s a difference between going to the game because you’re a fan and want to go to the game and going to the game because it’s something to do.
Caryn Rose is a Brooklyn-based writer and photographer who documents rock and roll, baseball and urban life. From 2006-2011, she authored the groundbreaking blog metsgrrl.com, covering baseball and the New York Mets. A Whole New Ballgame is her second novel. You can find her at jukeboxgraduate.com and on Twitter at @carynrose and at @metsgrrl during the season. Purchase A Whole New Ballgame HERE!
Posted by Lance Smith at 6:00 AM