I had the pleasure to ask Tom Swyers questions about his book "Saving Babe Ruth" and his answers show that this is a topic of which he has a great deal of passion. 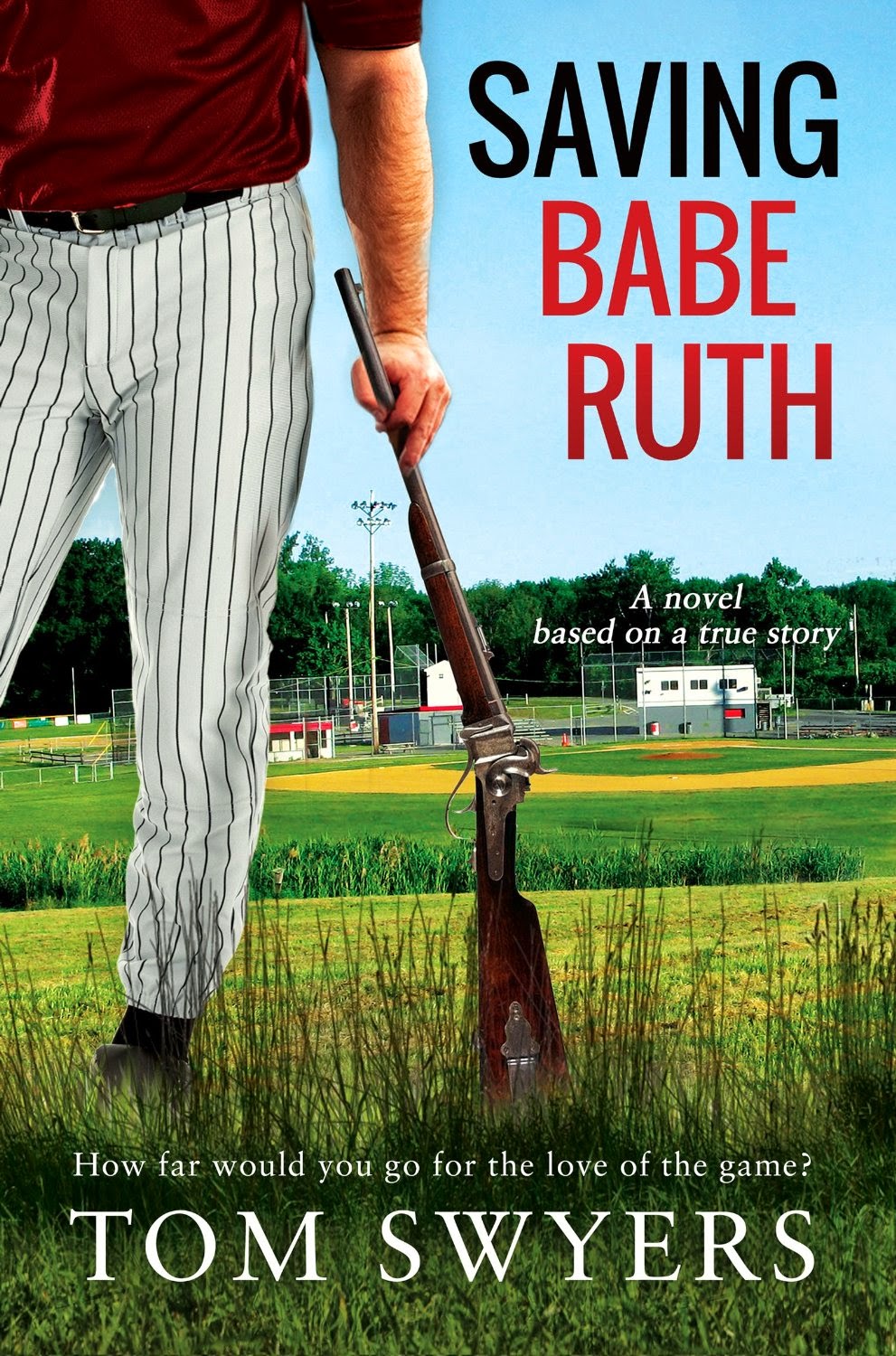 1. What inspired you to write a book on saving a youth baseball league in a small town?

A few years ago, I experienced firsthand the pressures that community baseball and its volunteers undergo while I managed my hometown league’s 13-18 year old baseball program. I had to endure sheer craziness (threats, harassment, and a three year lawsuit) brought on the promoters of a travel baseball outfit simply because I was trying to save a community baseball program so that all kids of any skill level could play baseball in their hometown. Everything, including the kitchen sink, was thrown in my direction.


I’ve been silent for years about what happened, but now it’s time to tell the story through Saving Babe Ruth. It needs to be told because Saving Babe Ruth’s storyline is playing out in communities across the country to one degree or another.


Community baseball leagues have told me similar stories about how their leagues are struggling in the face of travel baseball and other pressures. The Washington Post ran an article on how travel baseball is eroding community baseball in May of this year. I was invited to speak at the New Jersey State Little League Championship Banquet last week partly because community leagues throughout the state are facing similar pressures.

If anything, Saving Babe Ruth is timely.

2. There is a lot of talk in the media today about youth sports and how many of the organizations and parents seem to lose sight that this is supposed to be about the kids having fun playing a game.   From the research you did for this book, would you say that this is accurate or more of an urban legend?   What really is the state of youth sports in comparison to some of the stories and rumors?

Let me answer that question by focusing on youth baseball before making a generalization with respect to all youth sports.

Saving Babe Ruth offers an unprecedented look at the underbelly of youth baseball today and the underlying forces at work. I don’t think there’s a published book available like it in that respect.

I have talked with representatives from a number of community baseball programs around the country. I think there is a parent population in every town or city that loses sight of why community baseball is important. The size and strength of that group varies with the town or city. Sometimes, the group can be small, but it can make up for its size by being loud or powerful, sometimes both.

In order for the community baseball model to live up to its full potential, players of every skillset have to make a sacrifice. The lesser skilled players generally do not have the opportunity to play on an all-star or travel teams in the summer. That’s their sacrifice. Summer baseball is not readily available to them after the league’s recreational season ends.

The more skilled players must spend part of their time playing on teams with lesser skilled players in their recreational league composed of all kids from their community. That’s their sacrifice. In exchange, these better players have the opportunity to play on travel or all-stars teams in the summer through their community league.

The problem occurs when parents of the more skilled players or the parents of the more financially well-off players (not necessarily the more skilled players) decide they don’t want their child to sacrifice anything. They just want their child to play pure travel baseball not necessarily affiliated with their community league. They don’t want to bother with the recreational league and the other lesser skilled kids (in their view) for a variety of reasons.

But the blame doesn’t rest solely with this group of parents. Usually, there is a local travel baseball promoter who tells the parents that their kids are too good to be playing in recreational leagues, that they must play with better players to become better players themselves. They offer promises of exposure and scholarships to parents who have their kids play travel baseball exclusively in their baseball programs.

The spiel plays to the vanity of parents regarding their kid’s talents to make it at a D1 or D2 school, or even to play professional baseball. The spiel isn’t backed by statistics as only about 2.7% of all high school baseball players will ever receive a baseball scholarship and it will be a partial one at that, averaging $5,800 with no guarantees of continuation according to a New York Times study. Baseball offers one of the lowest average scholarship amounts of any NCAA sport based on this same study, second to last to only riflery. But parents either don’t learn about this until it’s too late or feel the pressure to pay up to keep up with other paying families. The fees for these travel baseball teams can be outrageous.

When enough players and families bolt for the Promised Land of travel baseball, community leagues struggle to survive and some fold. Sadly, there are a significant number of kids who are then deprived of a baseball experience in their hometowns. They must find something else to occupy their free time. Unfortunately, there are not a lot of other positive outlets available to them because schools and governments are cutting back on their programming. As a result, these kids find other things to do and often find themselves getting into trouble and undermining the health of their communities. I’ve seen that happen.

On top of this, sometimes school districts and local governments are unsupportive of community baseball for a variety of reasons.

While I can envision situations where travel baseball alone could support a community, those situations are by far the exception in my experience. Most of the time, in my view, everyone loses when the pure travel model is at work, except for the youth sports business interests, like the travel promoters.

Overall, I see that community baseball and youth sports in general today are under extreme pressure from individuals and outfits that seek to make a business of youth sports at the expense of kids, families, and their communities.

3.   Some of the characters in “Saving Babe Ruth” may seem to not be realistic to some readers and reviewers.  Two examples would be the main character of David and his obsession with not only the Babe Ruth league but also his use of weapons in defending the field.   Another example is the high school principal who moonlights as a professional sports agent (or maybe it is the other way around).  What was your inspiration to create characters such as these?
I guess the characters’ realism depends on the reader’s life experiences.

I was invited to speak at the New Jersey State Little League Championship Banquet last week in Berkeley, New Jersey and said this about the state of youth sports today:

You will simply not believe what is going out there and that’s understandable because our perceptions have not caught up with the reality of what is happening behind the scenes in youth sports.

There are plenty of “Davids” out there who are passionate about supporting or fighting to save their community baseball programs. I met quite a few while in Berkeley and in talking with people across the country.

One thing that makes some of these volunteers so special is that a number of them don’t have kids involved in baseball any longer because they’re in college or pursuing a career. These parents have stayed on because they know what baseball meant to their kids and what it means to the health of their communities. They are unsung heroes.

Many people are fighting a civil war over their community baseball programs today in their towns or cities and I think they can relate to David’s character in Saving Babe Ruth.

Yet David’s appeal, I think, goes beyond a story about youth baseball. Margot Livesey, a New York Times bestselling author and a wonderful writer, felt that David was a “man for all seasons” who rises to the occasion. One reviewer thought David reminded her of Kevin Costner, a man who maintains his wholesomeness even while firing an antique weapon at his rival. Carl Strock, a reporter who is mentioned in the novel, said you don’t have to be a baseball fan “to relish this story of intrigue and dedication on and off the diamond.”

With respect to the realism of the sports agent/school principal character, I understand why readers and reviewers don’t think it’s possible.

You said in your review, “I mean, really, an agent representing a superstar NFL running back can double as a school principal? It was a nice touch to the story, but for a character it felt like overkill for what the author was trying to illustrate.”

I totally understand and fully appreciate your point of view. I’d feel the same way if I were in your shoes. But don’t forget that Saving Babe Ruth is a novel based on a true story.

A news reporter asked about this character before I spoke at the New Jersey State Little League Championship Banquet. I’ll tell you essentially what I told him, and I’m challenging readers and reviewers here.

There are specific news accounts and incidents referenced in the novel naming real, high-profile professional athletes and citing their interactions with the sports agent/school principal character. Research them. A stunning reality awaits.

The more a reader fully understands this reality, the more he or she will see an entirely new and shocking dimension to Saving Babe Ruth.

Saving Babe Ruth is a thriller novel based on a true story that also reveals a real mystery about a town and its secrets.

I think it’s wonderful that readers and reviewers seem to enjoy Saving Babe Ruth even though they appear unaware that this dimension exists.


4. Are you a baseball fan?  If so, what level of the sport and/or teams do you follow?  If you are not a fan, then why baseball as a subject?
These days, I’m more of a fan of the sport as opposed to any particular team, though I’ve always been a Yankees fan. While I like to watch a good baseball game, my interest in baseball goes beyond the game today and extends to the history of the baseball dating back to its origins. Baseball is so much a part of our heritage. I find it fascinating to see what was going on with baseball at any particular moment in our history.


5.    Are you currently working on any other projects and are there any other books that will soon come out?   Feel free to shamelessly plug your works here!
I have some projects in the early stages, but I want to spread the underlying message of Saving Babe Ruth first and foremost. Baseball should be available to every town and city across the country. All kids, regardless of their race, religion, sex, background, or skill level should have the opportunity to play.