Review of "The Fireballer"

Continuing my goal of reviewing more fictional sports stories, I was able to obtain an advance copy of this novel due out in January 2023 and it was fantastic.  It was a very moving story about a pitching phenom and an event that has been on his mind for many years.  Here is my review of "The Fireballer." 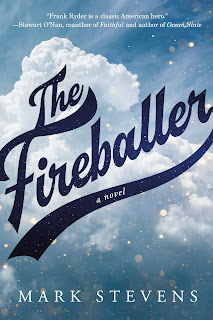 Title/Author: “The Fireballer: A Novel” by Mark Stevens

Review: The best way to begin a review of this book is to ask a few “what if?” questions.  What if a rookie pitcher for the Baltimore Orioles has set the baseball world abuzz with pitches that exceed 105 miles an hour?  What if batters are so helpless trying to get a hit off this pitcher that Major League Baseball is contemplating rule changes to limit the speed of pitches?  What if this pitcher has a dark secret that has been haunting him since his days of Little League Baseball?  These questions, and many more, are the heart of this outstanding baseball novel by Mark Stevens.

Frank Ryder has an amazing fastball, an uncanny means of keeping an even keel both on the mound and at a press conference but an unfortunate event when he was 12 has been weighing heavily on his mind.  For such a complex character, Stevens does a wonderful job of portraying Frank in a manner that every reader who picks up this book will be cheering for him, baseball fan or not.

That is because while the book is full of baseball (more on that later), the non-baseball parts of the book and Frank’s life are wonderfully written and the reader will find out a lot about the pitcher whose fastball is unhittable, but whose psyche is very fragile. Other characters in the book such as Frank’s long distance girlfriend Maggie, his brother Josh (a minor league catcher) and the owner and manager of the Orioles are also well developed and characters the readers can connect with, even if they are not baseball fans.

However, with the many chapters that talk about baseball, specifically the games in which Frank pitches and the pennant race that involves his Orioles team, a baseball fan will truly enjoy this book.  It addresses many issues that the game faces today – the “unwritten rules” that must be followed, the use of analytics, the lack of offense as pitchers are becoming faster, and even media coverage of the game.  For a fictional book on the game, it has an authentic feel to the state of the sport.  Even how one of those “unwritten rules” are discussed and handled by players, which is at the core of why Frank is facing his demons from that time long ago in the middle of a spectacular season.

This review cannot do justice for how much I enjoyed reading this book.  Not just for the baseball, but for the various messages it tells about self-reflection and the care and compassion shown to Frank by those who either are close to him or whose thoughts were sought out by him.  The book is just as big a winner as Frank’s won-loss record.

I wish to thank Lake Union Publishing for providing a copy of the book in exchange for an honest review.