Review of "Seventeen and Oh"

What is more appropriate than writing a review on a great football team during NFL playoff time?  Even better, the book is about the only perfect team during the Super Bowl era, the 1972 Miami Dolphins - and the book is just about as perfect as the subject.  Here is my review of "Seventeen and Oh." 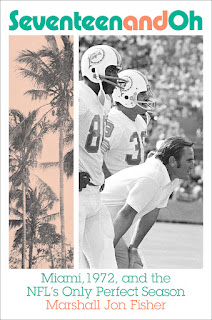 Title/Author: “Seventeen and Oh: Miami, 1972, and the NFL’s Only Perfect Season” by Marshall Jon Fisher

Review: As of the writing of this review, there has been only one perfect season in the NFL during the Super Bowl era.  The 1972 Miami Dolphins completed the regular season with a perfect 14-0 record, then defeated the Cleveland Browns, Pittsburgh Steelers and Washington to complete their perfect year. 50 years later, Marshall Jon Fisher has written a book about that team that is almost as perfect as the 1972 Dolphins. Just about anything you would want to know about the team is in the book.

Fisher grew up in the Miami era and he shares some stories of his fandom as a child that tie in nicely with the particular subject in the chapter where a story would appear.  As do many sports books about a bygone era, he also ties in some social and political commentary as he includes updates on the presidential election (especially since both major political parties held their convention in Miami that year), the Vietnam war and the peace talks taking place in 1972 and even some talk about the last mission to the moon, Apollo 17.  Just like with his personal stories, Fisher does a nice job of weaving these topics into the book without them being a distraction or a lecture.

As good as those stories are, his writing about the team and personnel is even better.  While many books on great teams or seasons will focus on a small number of key people, this one has small bios or information on nearly everyone associated with the team.  There is plenty of material on the Hall of Fame people on the team – Bob Griese, Nick Buoniconti, Larry Csonka and head coach Don Shula for starters.  But just as prominent in the book are others who because of the position or role they played may not be as familiar to casual readers.  These include people like Jim Langer, Larry Little, Vern Den Herder and Jake Scott.  By including information on so many people, the reader will understand much more about how the Dolphins truly came together as a team that year.

The book’s chapters are divided up by each game played, plus one chapter on the previous off-season in which coach Shula reminded them of their loss in the previous Super Bowl, one chapter for the 1972 pre-season and one for what became of the people after the perfect year.  That one does include mentioning the “celebration” that takes place every year after the last undefeated NFL suffers its first loss.  The football writing, especially the description of each game and the information on key people involved in that particular win, was excellent.  It was detailed enough for hard-core football fans to enjoy, yet easy enough that more casual fans won’t be confused by too much detail.  That was what made this book one of the better football books I have read.

Any football fan at any level, whether they were around to see that outstanding Dolphins team, will enjoy reading about the best season any NFL team has ever had.  As the 50th anniversary of that season approaches, it is a great way to spend time either reliving or learning about a truly great team.