A few of the upcoming books in my reading queue are either quite lengthy or quite detailed, meaning that these will not be quick reads.  This one is one of those of the latter quality - and quality is the key word as this is a high-quality book on one of the biggest underdog hockey teams to ever compete for the Stanley Cup.  Here is my review of "Klondikers" 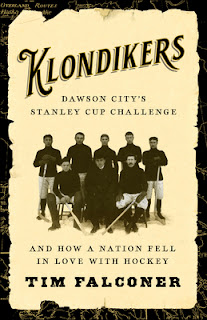 Title/Author: "Klondikers: Dawson City's Stanley Cup Challenge and How a Nation Fell in Love with Hockey" by Tim Falconer

Review: While many sports books, no matter the sport, do combine history, social events of the time and even national pride while discussing a particular event in the sport's history, this book about a hockey team from the Yukon competing for hockey's most prized trophy, the Stanley Cup, is a masterful combination of all these subjects.

Tim Falconer takes the story of a rag-tag hockey team from Dawson City and follows them not only on their journey to Ottawa to take on the defending Cup champions, but also provides readers with excellent information on the Klondike gold rush that resulted in the formation of Dawson City. He also paints a very good picture of both the social situation in Canada as they were emerging into the 20th century and becoming less influenced by Victorian-era norms.

Not only Canadian history is portrayed in the book – two excellent hockey history subjects are discussed as well. Readers who may not be familiar with either the origin of the Stanley Cup or how the early version of the sport was even rougher than it is today will enjoy learning more about hockey in the early 1900's.

The person most important in the transformation of the Stanley Cup to become hockey's most holy grail, P.D. Ross, is portrayed extensively here as well as Weldy Young, who was the player who was most responsible for the success of Dawson's team and made them believe that their amateur team could compete for the Cup.  At the time, amateur teams, not professional, were competing for the trophy as Dawson competed with Ottawa about 15 years before the creation of the NHL and one of the more stubborn Victorian-era traditions still in vogue was the purity of amateurism.  While not explicitly stated by Falconer, it was clear that this was still the belief in the country and professional players would somehow taint this image.  That quickly came to pass, but the nation's fascination with the voyage that Dawson took to play those two games was clearly a nod to the amateur status.

Unfortunately for Dawson, the weeks-long journey caught up to them and their lack of conditioning resulted in an easy victory for Ottawa.  Nonethless, the entire nation was captivated by the Klondikers and this story is part of the legacy of how hockey became the national sport for Canada.  Even after the tourney, Dawson played more games in the east and Maritimes, some with great attendance, in order to not only raise funds for the trip back but also to allow the fans who followed them to see them play.

No matter which aspect of the Klondikers' interests a reader, they are sure to be pleased with this book.  It is detailed and will have to be read carefully to fully appreciate all the information, but when all is said and done, this book is well worth the significant amount of time required to invest in it.

I wish to thank ECW Press for providing a copy of the book in exchange for an honest review.