It has been a fairly slow season for new baseball book releases, but fortunately there are a few on the way.  This one about Steve Dalkowski, known equally for his fastball speed and the wildness with which it was thrown, is a complete account of his career.  Here is my review of "Dalko" 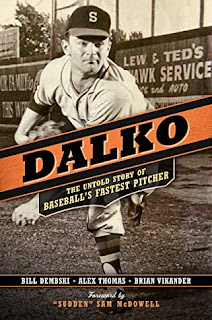 Even though he never pitched in a regular season major league baseball game, most baseball fans have heard of Steve Dalkowski through the legendary stories of the speed of his pitches, the inability to get many of those pitches over the plate and his drinking stories.  This book, a collaborative effort by three authors, is an excellent account of "Dalko's" athletic career.

When including Dalkowski's high school time, athletic is the more appropriate word to use than baseball since he was an outstanding football player. It was noted in the book that his passes when he played quarterback were much more accurate than his fastballs, which drove his coaches crazy when trying to figure out why he was accurate with the pigskin but not the horsehide.

There isn't much about Dalkowski during his childhood in the book, which is the only blemish on the book as the rest of his life is written with excellent detail and from many different viewpoints by people important in his life. Unlike many other biographies, this book had very good information on Dalkowski's life after baseball, especially when he, for a short time, had a stable family life and his drinking was not having an extremely negative effect on his life.  This is consistent with the writing about his baseball career.

That aspect is the best part of the book as it accomplishes two major factors that will have readers learning the real story behind the legend of Steve Dalkowski.  One is the truth, fiction or embellishment of several of the stories about his fastball and his wildness.  One example is that there is information on the story that he ripped the ear off of a batter with his fastball.  While it was true about the ear injury to the batter, that is an embellishment that grew over the years.  Another example is how he injured his elbow during an exhibition game when pitching for the Orioles, the team that signed him out of high school when they saw the blazing speed on his fastball and patiently tried to get him ready for the big leagues.  There are several versions of that injury and the book sets it straight.

The other major component of Dalkowski's baseball career, the patience and advice of the many coaches and teammates who tried to help him, is both maddening and sad.  Sad in the fact that nearly everyone wanted to help him and wanted him to succeed and maddening in that nothing seemed to work, probably because with so much advice, he very likely couldn't keep it all together.  His alcoholism is also addressed well in the book, with stories of when it seemed to start, some of the trouble he got into with his drinking and one very interesting fact – whenever he borrowed money from teammates or coaches for nights out, he made sure to always pay them back every day.

For the complete story of the legend that was Steve Dalkowski and his fastball, before the days of other contemporary pitchers known for speed like Nolan Ryan, this is the book to pick up.  It's a great read for not only readers who know about the talented but erratic pitcher, but also for those who have never heard of him and wish to read about an intriguing person.

I wish to thank Influence Publishers for providing a copy of the book in exchange for an honest review.