Having only heard very little about Oscar Charleston aside from him being one of the best players in the history of the Negro Leagues, I was very interested in learning more about the man in this book.  It delivered - it is probably to date the best source of information about him.  Here is my review of "Oscar Charleston." 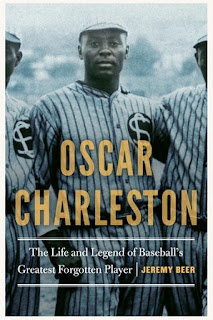 Review:
Ask most baseball fans or historians to name the best players in the history of the Negro Leagues and the immediate answers are usually Josh Gibson, Satchel Paige and Cool Papa Bell. However, if one takes a closer look at both the statistics available and the excellence of his play for a long period of time, the answer must be Oscar Charleston. Charleston's life and legacy are told in this excellent book by Jeremy Beer.

Whether one is researching Charleston's early life, his lengthy baseball career that took him to several teams' rosters or his personal life, it can be difficult to find official records and documents for him.  Beer did painstaking research to paint a complex picture of a man who was not only an excellent baseball player but also held other jobs within baseball with mostly successful results. He was a player-manager for a significant portion of his playing career and his rise in this profession makes for great reading, especially the 1932 season when he was the manager of the Pittsburgh Crawfords, considered to be the best team in the history of the Negro Leagues. Of note, he also was a scout for Branch Rickey and the Dodgers in the 1940's, becoming the first black man to be hired for such a position.

Reading the book gives the reader not only a good picture of Charleston the baseball player and employee, but also of Charleston the man.  He was portrayed by peers often as someone who was a trouble maker, especially with his penchant to never walk away from a fight.  Beer puts that reputation to the test with other testimony to show the respect he earned from competitors, including major league stars against whom he played in barnstorming or exhibition games.

Interwoven with modern statistics calculated from the available box scores and other sources of information, one cannot help to wonder how Charleston would have fared in the major leagues had he been allowed to play.  Even so, Beer paints a picture of a man who should be considered one of the greatest players ever to pick up a bat and glove.  Readers who want to get an informed introduction to Oscar Charleston should pick up this book.