Review of "Football for a Buck"

I am just going to come out and say it - this is probably the best book I have read since I started this blogging adventure more than five years ago. It helps that Jeff Pearlman is one of my favorite authors and the USFL had a colorful history.  If nothing else, the fact that this review is over 2100 words long instead of the usual 500-700 word review I write for books says that I loved this one.  Here is my review of "Football for a Buck." 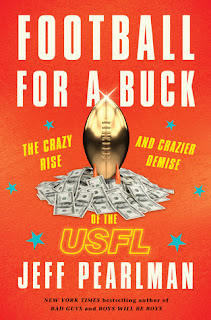