When I received a request from the author to review this book, I was happy to do so as I remembered the Columbus Chill. I had seen them play when I lived in Virginia as I saw many Hampton Roads Admirals games in Norfolk, and the Chill was one of the other teams in that league.  It was fun to read about minor league hockey and the team that led the way to the creation of the Columbus Blue Jackets.  Here is my review of "Chill Factor" 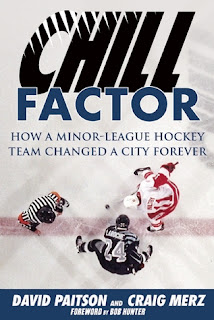 Review:
The Columbus Chill was a minor league hockey team in the East Coast Hockey League from 1991 to 1999. They were noted for unusual promotions, advertising and a rabid fan base. Many give credit to the success of the Chill for swaying the NHL to award an expansion team to Columbus, the current Blue Jackets. The history of the Chill is captured in this very entertaining book written by David Paitson. He was the Chill’s President and General Manager from 1991 to 1998.

The book covers the unsuccessful history of minor league hockey in Columbus before the Chill. Due to the fact that three previous attempts to bring professional hockey to the city in which Ohio State football was the king of sports, not many gave the Chill much of a chance to succeed.  However, that was not the case as the team waged an unusual marketing campaign in order to grab the attention of Columbus sports fans.  They wanted to reach the younger demographic of fans and edgy advertising slogans were the chosen method.

Here are two examples of these advertisements: “Assault someone, you get five years. In hockey, five minutes.  Is this a great game or what?”  “The late vulture gathers no roadkill.”  These ads were making some people uneasy, but the team was doing what it set out to do – make people pay attention and want to see a Chill game. The team was a success at the gate, setting an attendance record for minor league hockey with 83 consecutive sellouts. For its early years, the Chill had some success on the ice under coach Terry Ruskowski and kept it up for the life of the franchise which ended in 1999 to make room for the Blue Jackets, who started play in 2000.

This isn’t to say that everything was easy for Paitson and the Chill. Some of his best stories are about when the team had to scramble for dates at the old Ohio Expo Center Coliseum.  There were issues about booking, about the quality of the ice and so many other problems that it was at times a miracle that the team could book home games.  But the team and its management team was determined to continue play and the fans rewarded them by showing up at the games.

Hockey fans, especially fans of the Blue Jackets and those who followed the Chill will love these stories about the team that overcame long odds and proved to the world that Columbus was indeed a hockey city. This isn’t the best written or flowing hockey book I have read, and far from the worst, but it was certainly entertaining.

I wish to thank Mr. Paitson for providing a copy of the book in exchange for an honest review.