Review of "Masters of Modern Soccer"

While I have never been an avid soccer fan, I have casually followed the sport and have become a fan of Grant Wahl, a soccer writer for Sports Illustrated since the mid 1990's. When I saw he has a book coming out this spring and advance copies were available for review, I jumped on the offer as soon as possible. Mr. Wahl did not disappoint as this was a fantastic book on the modern game.  Here is my review of "Masters of Modern Soccer" 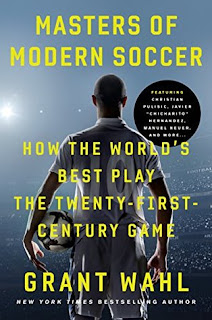 Review:
Long-time players and fans of soccer will notice how different the contemporary game is compared to the matches played in the 1970’s and 1980’s. There are several reasons for this, most notably the changes in responsibilities of the positions and the use of analytics. America’s premier soccer writer, Grant Wahl, interviewed seven men who are the premier people in their position or job in international soccer and the result is this excellent book.

This book has been compared to the best-selling baseball book “Men At Work” by George Will. In that one, Will broke down baseball by writing about various jobs done by people in the game and wrote about how the best performers handle that job.  Wahl does the same thing for soccer as he interviews the best players and management personnel.  The players are American midfielder Christian Pulisic, Mexican forward Javier “Chicarito” Hernandez, Belgian centerback Vincent Kompany, Spain’s Xabi Alonso and German goalkeeper Mauel Neuer.

Their insight into the game makes for compelling reading as they each share what they do to be the best at their position.  Whether it is how Kompany positions himself in relation to the opponent’s best goal scorer, the “Wow moments” Pulisic provides to fans or the drills on which Neuer works to improve his reflexes, each section is a lesson in how today’s game is played and why the sport has changed so much over the last few decades.

These changes are noted often by Wahl as he talks about positions that are no longer in vogue, such as the sweeper, or how drastically the skills have changed in order to be an elite player.  This is clearly evident for a goalkeeper, where Wahl writes that shot blocking, once considered the primary job of the keeper, is now only one of several skills at which a goalkeeper must excel. Neuer’s insight backs up this assertion.

Coaching and management get the same treatment as players do in this book as Belgium coach Roberto Martinez and Borussia Dortmund sporting director Michael Zorc are also interviewed and share their secrets for success as well. The biggest takeaway from these chapters was also mentioned in some of the players’ chapters.  The used of advanced statistical analysis is just as prevalent in professional soccer as it is in other sports, again most notably baseball. There is even a reference to “Moneyball” in the book as much like the Oakland A’s, Borussia Dortmund does not have the same financial resources like some other clubs like Manchester United, Real Madrid or Barcelona.  As a result, they do some creative thinking in the front office and Zorc’s insight will provide readers with some new information about this part of the sport.

Written with American readers in mind, this work is truly a masterpiece of the modern game. Wahl was the first author to write a soccer book that became a New York Times bestseller with his 2009 biography of David Beckham. This book could very well become his second.  If a reader has any interest in the sport, no matter how much or how little, this is a book that must not be missed.

I wish to thank Crown Publishing for providing a copy of the book via NetGalley in exchange for an honest review.