A confession: I hardly paid attention to Major League Soccer until I attended my first game this summer, watching the new expansion club Minnesota United face DC United.  The atmosphere was great and the fans were some of the noisiest I have ever heard at a sporting event that I attended.  When I heard about this book and the same type of environment that is present for another fairly new MLS club, I decided to take a look at the book - that was a good choice.  Here is my review of "Defying Expectations." 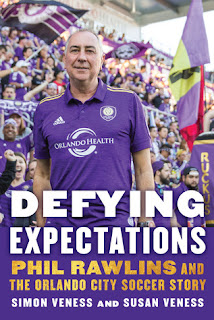 Rating:
4 of 5 stars (very good)
Review:
No matter the sport, league or level of play, one of the more difficult tasks in the business side of sports is to build a franchise from scratch.  Phil Rawlins, his wife Kay and their team of investors and executives did this in Major League Soccer, building the Orlando City Soccer Club from the ground up.  Their success, starting with Phil’s success in both business and football in England, is captured in this book by Simon Veness and Susan Veness.

The origins of Orlando City can be traced back to another soccer club, Stoke City who is currently a club in the English Barclay’s Premier League.  This team was the one Phil Rawlins followed from childhood and when they had been playing poorly enough to be relegated out of the Premier League, Rawlins felt it was time to do something about that and he became an influential member of Stoke’s board. His innovation put Stoke back on track, but the lure of building a soccer team in the United States brought him to Austin, Texas.  There, with his then-wife Wendy (Rawlins would have three wives, Kay being his most recent) they put together a success team in the heart of American football territory, piling up wins and drawing fans to Austin’s minor league team.

However, Phil’s ultimate goal was to build a team in the largest American league for soccer, Major League Soccer (MLS). The league wanted to expand to the southeastern part of the country and Orlando was considered to be one of the markets in which a franchise could be viable.  By then, Phil realized he had gone as far as he could in Austin, so he and his new wife decided to make the plunge and go for it in Orlando.

Using Six Core Values the couple developed at the kitchen table, they set out to find investors and other key personnel required to build a team.  Like in Austin, the franchise in Orlando started in the United Soccer League, winning the title in their first year, 2011.  But unlike Austin, they saw much more potential. Through hard work, perseverance even after setbacks such as denial for stadium funding from the Florida legislature and a very large and loyal fan following, the club became an MLS expansion team in 2015.  They made the league sit up and take notice by not only signing Brazillian superstar Kaka, but also for selling over 60,000 tickets for the very first game. Orlando City has been one of the more successful MLS franchises since then and they hope to continue this into the future.

This entire story is told in an easy to read manner by Simon and Susan Veness and covers much of Phil Rawlins’ life successes in both business and soccer. The story of how he went from a hustling salesman to earning $259 million on an initial IPO is just as interesting a tale as is the success of Orlando City.  The book is part business, part soccer and part biography of a man who never let setbacks stop him from achieving his visions.  It is an inspiring story that readers will enjoy, even if they are not soccer fans.