This book is one that the author has been giving away every month on Goodreads since it was published.  Every month, I would faithfully enter the giveaway - and every month, someone else was chosen.  Until out of the blue, the author asked if I would consider reviewing the book here - of course I said yes.  It was a very entertaining memoir - here is my review of "Odd Man Rush." 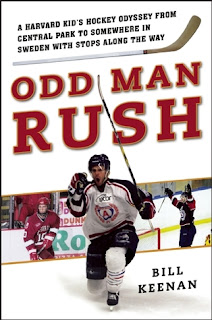 
Review:
If a child is playing a sport, chances are good that he or she dreams of playing the game at the highest professional level in the sport.  Hockey player Bill Keenan took that dream to its ultimate test as when he realized his dreams of a National Hockey League contract would not reach fruition. Instead, he started a European adventure, playing on teams in Gremany and Sweden.  The adventures he had while playing there as well as Harvard for his college hockey career are captured in this very funny and entertaining memoir.


The book is part hardcore hockey, part coming-of-age in both the sport and in life and part wild ride in the far outreaches of European minor league hockey.  Keenan writes these stories with a great deal of humor (some at the expense of others, some self-depreciating) and just a bit of melancholy as well.  The latter is especially true when he was in Sweden and had to end a relationship with a woman when he was sold to another team.


The hockey talk is great in that it is detailed enough to satisfy very knowledgeable fans, but easy enough to understand so that non-fans or casual fans will understand it as well.  There isn’t a lot of statistical information, no X’s and O’s and no detours to long winded explanations of the European minor league structure - just good stories about Keenan’s wish to keep his hockey-playing dreams alive as long as possible.  This is a book that hockey fans, humor fans and anyone who wants to read an entertaining memoir will want to add to his or her library.


I wish to thank Mr. Keenan for providing a copy of the book in exchange for an honest review.