Admittedly, I never heard of Urban Shocker before I saw this book offered for review by University of Nebraska Press.  I was curious to learn more than just his Wikipedia entry, so I requested the book and I am so glad I did.  This was a great read in which I learned much about the man.  Here is my review of "Urban Shocker." 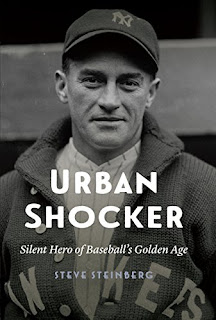 Review:
One of the lesser-known members of the famous 1927 New York Yankees was a pitcher who was on his second tour of duty with the Yankees. Urban Shocker was one of the pitchers for the team after several outstanding seasons for the St. Louis Browns.  His career and life is captured in this terrific biography by Steve Steinberg.

The book covers much more than Shocker’s life before the game, his career highlights and game-by-game accounts (there is very little of the latter).  The reader will learn much about Shocker’s mindset when pitching.  This is evident by his use of a spitball or “wet ball”, allowed when he began his career and one of the pitchers who was allowed to keep using it after it was banned from the game in 1920.  Another passage in which the reader gets into Shocker’s mind is when he threw this pitch as a rookie to two star Yankee teammates in an intra-squad game.  He was gutsy and did what he wanted.

This was also true throughout his career.  He was bitter about being traded to the St. Louis Browns, especially because he was considered a troublemaker because of who he befriended on the team. He always wanted the ball against the Yankees to show how wrong they were to trade him.  However, when the Yankees reacquired him, he was very excited to be playing for the same manager who he thought wanted to get rid of him, Miller Huggins.  The book does a great job of illustrating this relationship between the two men.

Shocker also wanted to keep his health problems as secret as possible, in which he succeeded as it was a surprise to many when he died months after retiring as a pitcher.  He had cardiac issues and it would case him many issues on the field late in his career, including sudden collapse. It was the main reason he had to retire, but he was a fighter to the end.

This biography provides a lot of information on Shocker, a pitcher whose contributions to the Yankees are often overlooked. The book even mentions Bill James’ proclamation that Shocker was one of the best pitchers of the era.  Written in a manner that gives readers a clear picture of Urban Shocker, both the man and the baseball player, it is a book that all baseball fans should add to their libraries.